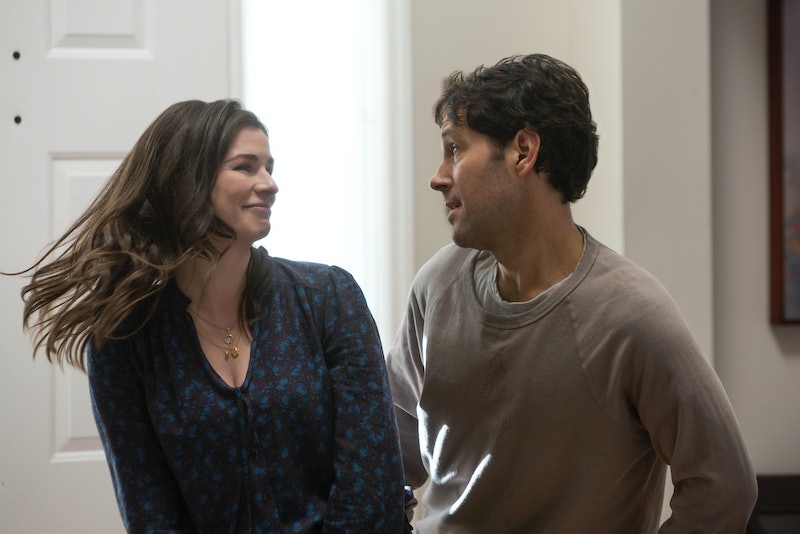 Spoilers ahead for Living with Yourself Season 1. No one in their right mind would consider turning down a dance with the likes of Paul Rudd. Which is part of the reason why it's so devastating when Aisling Bea's character Kate just can't bring herself to bump and grind in a hotel bar with one of Rudd's characters on Living with Yourself. The dance scene in the Season 1 finale of the Netflix series sees Bea and Rudd finally get their moves to Rick James' song "Give It To Me Baby" right (it helps that the Rudd in that scene is Old Miles AKA the original Miles, and not his clone, who doesn't know the dance). But while their moves are deliberately silly, the dance is a significant turning point for each of the show's three main characters.

Sitting around a table with reporters at the Crosby Street Hotel in New York City, Rudd, Bea, writer Timothy Greenberg, and directors Valerie Faris and Jonathan Dayton (Little Miss Sunshine) point out that while the series' obvious draw is watching the eternally charming Rudd play two versions of the same guy, Living with Yourself is also a melancholic exploration of what it actually takes to keep a marriage together. Apparently, sometimes it takes a man fighting with his new-and-improved clone for the affections of his wife to make her realize she needs to accept her partner, flaws and all.

Kate initially starts to warm to the idea of living with the new and improved version of her husband, instead of continuing to struggle to with the original one. But there are some things that good posture and a clean shave just can't replace for Kate, such as the muscle memory to perform an intricately choreographed wedding dance with your wife on a moment's notice, which Old Miles does in the series finale. The finale dance ultimately facilitates the only impactful communication the couple has throughout the entire series — a sign that perhaps they still have a connection worth saving.

Rudd and Bea's characters shimmying, vogue-ing, and two stepping in their living room (Rudd makes an "aw shucks" face as both Daytons rave about what a good dancer he is) is the very thing that drives the couple back together, albeit to a complicated version of a happy ending. Rudd describes the dance, choreographed by Jenny Shore Butler, as "a cheesy metaphor" that shows they're in sync. Jonathan agrees it was the best way to show Kate and Miles still had a connection worth fighting for without using words, which might be misconstrued. "You know when you can't describe why two people work together and they just do? The two sex scenes and the two dances scenes are the way of showing that something there works, without life having gotten in the way," Bea tells Bustle.

The night before Kate and Old Miles get back together, New Miles awkwardly attempts to do the dance with her in a hotel bar to no avail. Watching Kate's face fall when she realizes that she might have to choose between a no chemistry relationship with him and a crappy relationship with her actual husband is crushing. It's the one time you really see Kate realize she contributed to the mess of her marriage; though the story is focused on Rudd's Miles, it's also about her.

Bea says not vibing on the dance floor with New Miles was one of the hardest parts of filming. "We worked so hard on the dance, so it was almost really hurtful doing the one in the bar where we don’t get each other because it was harder to fake, because it was still Paul," she says. Valerie agrees that it was hard to watch, but also sort of hilarious, because you know, he's still Paul Rudd. "One of my favorite things about the dance is seeing New Miles try really hard to get her into it. There’s one movement [Paul does], like moving backwards... I love that moment so much," she says, shimmying her shoulders with her thumbs up.

Which is why the finale dance with Old Miles is such a sweet and hopeful act, like in an old rom-com when someone defies airport security to stop their soulmate from boarding a plane. Greenberg says that he doesn't think that if Kate had asked Miles to go dancing when we first meet him that he would have said yes, because dancing is a joyful thing to do. "I feel like in a way that question — 'Do you want to dance or not?' — is the perfect distillation of what kind of place you're in. Are you in a good, confident, 'I dont mind if I'm going to look silly' place or not?" The living room dance shows that Old Miles is ready to be Kate's partner again, and vice versa.

At the end of the season, Kate and both versions of Miles decide to have a baby together, so it's not exactly going to be all moonwalks and twists in their future. But thanks to a ridiculous wedding dance, they know that there's a "gel and a physicality that works," Bea says. Which means, all clones aside, their marriage is worth fighting for.