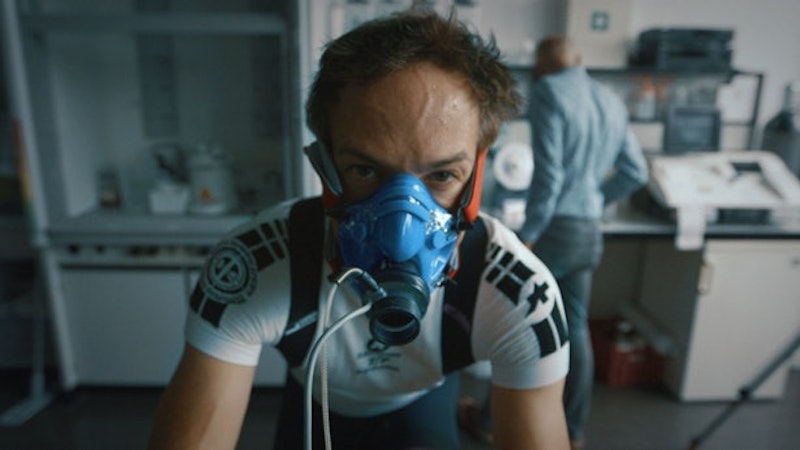 Bryan Fogel didn't set out to become a history-changing documentarian. An actor and playwright living in Los Angeles, he'd only ever directed and produced one other film before, the fictional romantic comedy Jewtopia. He had an outlandish idea for a second film, rooted in his lifelong love of cycling: a documentary focusing on performance-enhancing drugs, with Fogel as central narrator and human guinea pig. Titled Icarus, it was going to be a humorous, possibly dangerous personal look at the dirty secret behind all sorts of athleticism. What Fogel didn't expect, though, was that his doc would break the sports world's biggest scandal wide open in real time. If you want to understand the reasoning for the recently announced shocking Olympic ban on Russia and know more about the story, you must watch Icarus, the documentary exposing the Olympic scandal.

As said, the movie didn't start out with that mission. In 2013, cycling champion Lance Armstrong admitted to doping for years during his professional career, and Fogel says in the doc that this was the turning point that inspired him to make the film. Armstrong wasn't ever actually caught doping by watchdog groups; his teammates reported him in exchange for their own immunity to repercussions. If Armstrong, one of the most-tested athletes in the sport, could get away with doping for all those years, who couldn't? In an interview with Vulture, Fogel also admitted, "I’d had this curiosity for years about what these drugs did, like, If I did these drugs at 17, 18, 19, could I have been a professional athlete?"

That was the original idea for Icarus, a smaller, personal story about what these drugs were and what effects they had on athletes. Fogel planned to compete twice in an annual event in the Alps called the Haute Route, something that he describes in the documentary as “the single hardest amateur bike race in the world.” His first time, competing drug-free, he came in 14th out of 440. Fogel planned on doping up and improving his standing the second time around, but to get started, he needed some outside help. A UCLA scientist put Fogel in touch with Dr. Grigory Rodchenkov, the head of Moscow's Anti-Doping Center. The offbeat and charming Rodchenkov chatted with Fogel over Skype, and set him up with a specific doping regime. Rodchenkov told him precisely what he could expect to feel and when, but in an IndieWire article, Fogel says he didn't see the full strangeness of the situation at the time. “For me, the story was me going through on camera what pro athletes do, with this crazy Russian scientist advising me, which he shouldn’t have been doing."

Fogel and Rodchenkov's friendship grew, but it wasn't until Nov. 9, 2015 that Fogel realized the full scope of what he'd gotten them both into. During their Skype conversation that evening, Rodchenkov told Fogel, “Bryan, it’s a disaster, they’re killing people, cutting heads.” Rodchenkov had been recently incriminated in a World Anti-Doping Agency (WADA) report on Russian state-sponsored doping. Up to that point, Fogel had been in the dark about the full scope of what Rodchenkov did, but now his involvement with setting and covering up doping for Russian athletes at the government's behest came to light.

From that point on, Icarus focuses on getting Rodchenkov safely to the states, positioning him as a whistleblower who'd give information to news outlets reporting on the situation, and fighting on his behalf against the FBI, the Russian government, WADA, and the media. The stakes were high; two of Rodchenkov's close colleagues tied to the scandal died unexpectedly within weeks of each other, under highly suspicious circumstances. Ultimately, Rodchenkov's whistleblowing damned the entire Russian government in the scandal, and had ramifications beyond the sports world. In the same Vulture interview, Fogel even ties it to Russia's hacking of the 2016 elections. "One of the reasons [for the hacking] was retaliation for what they saw as American involvement in unveiling Russia’s state-sponsored doping program. And that’s because the story was broken through the New York Times, and that Grigory was in America."

After a year-long investigation of their own following Rodchenkov's reveal, the International Olympic Committee recently handed down an unprecedented punishment. Not only is Russia banned from the Olympics entirely, but the official Olympic record books will now and forever show Russia won no medals in the 2018 games. Icarus helps non-sports obsessives fully grasp the scope of the betrayal, its deep, long-term effect on the world of sports, and arrive at understanding the reason for the severity of the sentence.

Asked by Deadline how he feels about the news, Fogel and fellow filmmaker Dan Cogen released a joint statement saying, "We applaud today’s decision by the International Olympic Committee....We salute whistleblower Dr. Grigory Rodchenkov, who risked so much to tell this story, and support all those who are willing to speak truth to power.” When the 2018 Winter Olympics take place in PyeongChang, there will be no trace of Russia whatsoever, an immense absence. But by catching Icarus, streaming on Netflix now, you'll have a firm understanding of the vast scandal behind it.