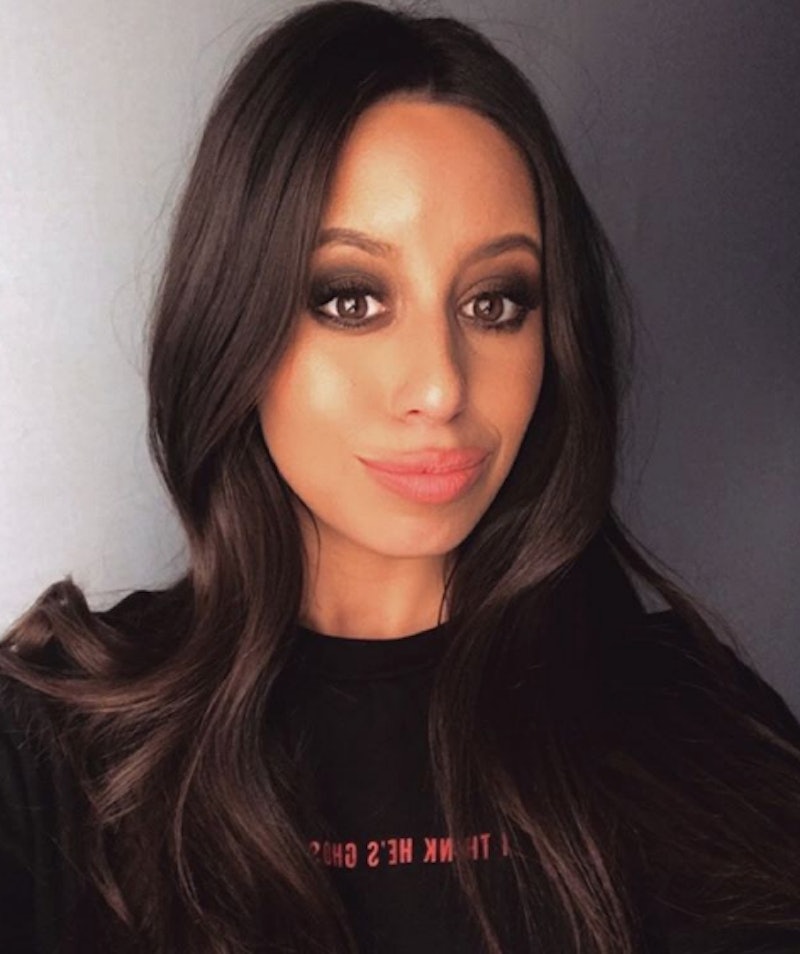 Naz Perez has always been a sucker for love. In fact, she loved the fantasy behind fairytale romance so much that she decided to become a producer for The Bachelor, and its many spinoffs, to help make other people's dreams come true. But the truth was, Perez had never been in a relationship herself. She had no idea what it was like to truly fall in love.

Perez loved her two and a half years working for the show — a period in her life she says she'll always be grateful for. After meeting a slew of men who were not interested in making any type of long-term commitment throughout her personal life, The Bachelor proved to her once and for all that there are in fact people, from all over the country, who are out there looking to make a real connection.

"In this day and age, it’s very easy to create a dossier of who people are before you even meet them," Perez tells Bustle. "I think that’s really hurting us, because we are more likely to pass premature judgement. On The Bachelor, everybody gets their fair chance."

Ultimately, Perez decided to leave the show upon the realization that she hadn't been on a date in over two years. Where her professional life was booming, her personal was lacking. So she departed set and returned home to LA, where one day, fate literally knocked on her front door.

"My neighbor Dana showed up at my apartment, hysterically crying, in such excruciating emotional pain where she couldn’t even sit down," Perez says. "She had just moved from New York to live with her high school sweetheart, who she had been with for over 12 years. They weren't engaged, but they had been together for so long that she had created a blueprint of her life with him. But it just wasn't working, so he had moved out." Perez did nothing but listen to Dana's story, and was surprised when her neighbor thanked her profusely, claiming that she couldn't speak with anyone else about her pain. She claimed that her friends and family were encouraging her to move on and get over it, which was something she just wasn't ready to hear.

Perez began playing around with the idea of opening up to a stranger about your deepest, darkest feelings and thoughts, but it would be another six months before the true work behind Heartbroken Anonymous would begin. First, Perez would experience heartbreak herself. She entered her first real relationship, experiencing what she thought was love, for the first time. "He had a toothbrush at my house, we hung out every day," Perez says. "It was a foreign concept to me: I had found someone who actually wanted to text me back."

Perez felt blindsided when he ended things shortly after she met his parents.

Feeling heartbroken for the very first time, Perez fell into an acute depression, and began seeing a therapist. "I think I’m someone who equates my success with the work I do, and for so long I was this big time producer on The Bachelor, then suddenly I was nobody," Perez says. "I put all of my eggs into one basket. I relied on him to make me happy, when I couldn’t do it myself. I was devastated, and because I wasn’t working and had such low self-esteem, I was having nightmares. That’s when I decided that I had to start Heartbroken Anonymous."

"If you cut your finger, a doctor will write you a note stating that you don't have to go to work. But if you experience a death or you’re going through a divorce, you need to resume life as is."

Heartbroken Anonymous is a forum for those suffering from everything from the loss of a parent, to the end of a dream job, or unrequited love. "I want to redefine what heartbreak means," Perez says. "If you cut your finger, a doctor will write you a note stating that you don't have to go to work. But if you experience a death or you’re going through a divorce, you need to resume life as is. And I think that’s bullsh*t."

So Perez began hosting meetings in Los Angeles, on the second Thursday of the month. Participants sit in a circle, passing around a small bean bag: when you have it, you have the option to share or pass it on. There's absolutely no interrupting or cross talk allowed, as Perez is adamant about creating a non-judgmental space. Each session concludes with everyone going around the room and expressing one thing that they're grateful for. After meetings, members stick around to connect with each other and offer support. "People have become friends, and have learned to lean on each other," Perez says. "I’ve been able to build this community, and I think that's really cool."

On any given day, Perez says Heartbroken Anonymous, which is celebrating its one-year anniversary, can include anyone from a homeless teenager to a elderly tycoon. She emphasizes the group's inclusivity and says that everyone there takes the opportunity to learn from and grow with each other. It's truly a testament to the concept that heartbreak, like love, is a universal concept. "Heartbreak brings everyone down to the same level," Perez says. "If you’re going through a traumatic experience, it can feel like life is moving on around you, while you’re stuck. I just want to unify people, because we all should have each other’s back"

Hope As A Universal Truth

So what has Perez herself has learned from hosting, attending, and participating in meetings for the last year? "People often don’t know what to say when others are heartbroken," Perez says. "They try to make that person feel better by putting whatever or whoever is causing their heartbreak down. I don’t think that works. Telling people to move on accomplishes nothing: they know they have to move on!"

Additionally, Perez has learned not to leave people alone when they're heartbroken. She now encourages anyone who knows someone in their life who is struggling to reach out, occupy their thoughts and actions, and be there with an for them — just don't tell them what to do. The absence of judgement is the true key to making someone feel safe.

But Perez's greatest takeaway from her experience has been a single, simple concept: hope. People who attend her meetings continually and inherently have hope instilled in them, Perez says. "There is so much bad going on in the world, but through listening in at the meetings, I’ve realized that there is so much good in the world too," Perez says. "If anything, this community has given me hope for humanity."

Hope has become the one requirement for attending HBA: being open to the possibility of personal growth and gain. It's a message that Perez stands by, and continues to work tirelessly to accomplish. "There's a new section on the site where members of our community can now anonymously share their own stories," Perez says. "So no matter where you are in the world, you don’t have to feel alone."

More like this
5 Signs You Have A Toxic Relationship With Yourself
By Lexi Inks
17 Valentine's Day Tips For New Couples, Straight From Relationship Experts
By Carolyn Steber
12 Active Date Ideas That'll Get You & Your Boo Outside
By Lexi Inks
TikTok's Voluntary Celibacy Trend Has Sparked A Movement
By Lexi Inks
Get Even More From Bustle — Sign Up For The Newsletter
From hair trends to relationship advice, our daily newsletter has everything you need to sound like a person who’s on TikTok, even if you aren’t.