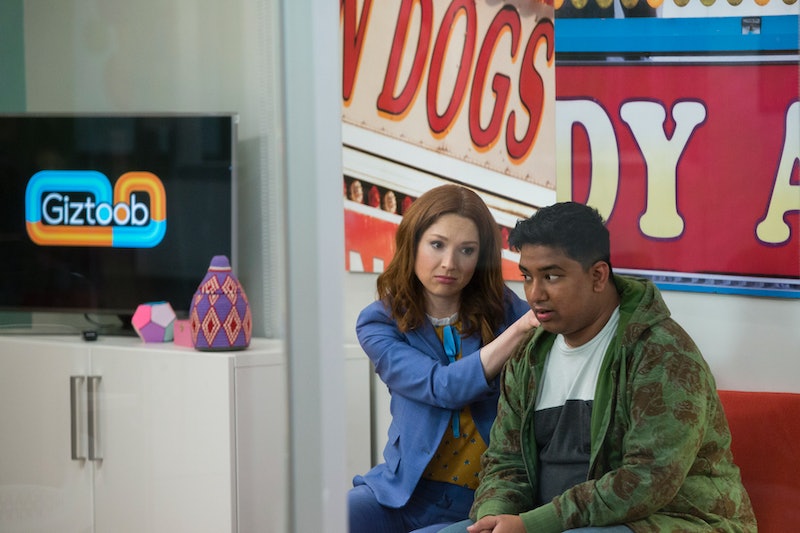 Kimmy Schmidt fans have been awaiting her show's return to Netflix to get the healthy dose of quirky, relevant, and a lot of times, feminist comedy her character always delivers. Well, Season 4 of Unbreakable Kimmy Schmidt has a mixture of all of that, including a whole bit in the first episode that faces one particular (and controversial) current event head on. But the #MeToo jokes in Unbreakable Kimmy Schmidt misses the mark by not treating the issue with the seriousness it deserves.

Kicking off a fresh batch of new episodes with workplace sexual harassment jokes feels a bit like pouring salt on a fresh wound. But at the same time, it makes sense that this show would want to be in the conversation about this real, ongoing issue, which came to the forefront last year and continues to reverberate in Hollywood and beyond. And let's face it, this conversation is going to be a long one, so it needs to have a seat at the comedic table — as long as those contributions are respectful, productive, and sensible.

In the first episode of the season, the reference to the #MeToo movement is brought about (and somewhat poorly explained) in a joke structure that Tina Fey — who wrote the episode alongside co-creator Robert Carlock and writer Sam Means — has used before: role reversal. While it's definitely an in-your-face tactic, it doesn't always deliver the explanation and deconstruction that is warranted by the layered topics Fey has chosen to tackle with it.

Remember Kimono You Didn't! of Season 2, Titus' renowned and controversial one-man geisha show? The show used his character and the backlash to his show in order to address criticism of its own Season 1 — particularly the storyline revealing that Jacqueline, played by a white actor, is actually Native American. But the geisha show plot was heavily criticized too; the Huffington Post accused Kimmy Schmidt of "silencing of marginalized voices" by poking fun at those who expressed offense over the show's treatment of race.

In Season 4, the #metoo gag presents itself in a similar manner. Kimmy is in her new job at a trendy tech firm, Giztoob, where she is the only woman aside from a robot named C.H.E.R.Y./L, and she is told by her boss that she needs to fire Kabir, an employee who is consistently late. In true Kimmy fashion, she insists on putting a positive spin on this termination, fearing that she will embarrass Kabir. Well, that positive spin turns into an ignorantly intrusive one. Before breaking the news that he's being let go, she invites him into her office to chat, and gives him a slow back rub. To make matters worse, her pants accidentally end up around her ankles, and she makes a horribly unconscious sexual innuendo when offering him his favorite smoothie as a consolation. "This thing isn’t going to suck itself!” she exclaims. Yikes.

Kimmy is shocked to later discover that Kabir has filed a sexual harassment complaint against her and decides as the "head of HR" to place herself on leave and open an investigation — on herself — to find a solution that benefits everyone. She runs home to Titus to explain what happened, repeating all-too-familiar excuses that accusations are often meant with. She asserts that Kabir "took everything the wrong way" and that the interaction simply "was a misunderstanding." Kimmy tops her rant off by saying, "It’s not like I’m a Weinstein or a Spacey or the President." "It doesn't matter," Titus says. "There's a reckoning going on, and it is important, and as overdue as the library book I've been using as abs."

To contextualize the issue, Titus talks to Kimmy about her boundary issues, and how they were a problem when they first became roommates. But over time, Kimmy learned to respect them, and she has to figure out how to do that with others as well. She marches into work the following day and is able to respect her coworkers' personal space by simply picturing them all as her bold and boisterous roommate.

Is this a storyline about the #MeToo movement that accurately represents what's really happening in workplaces all over the world? Kind of. But it just grazes by the issue, so these jokes may have been better off omitted from the script. Sure, the scene is funny, but it doesn't really offer a solution to the epidemic of harassment and humiliation.

According to The Washington Post, four out of five workplace sexual harassment complaints are made by women. So by putting Kimmy in the perpetrator's place, the show attempts to make a point about how easy it should be to not harass a coworker or employee. But the overall reference may have been more successful and relatable if a man were on the receiving end of that accusation. After all, Kimmy is the only woman in her office, which is representative of the lack of women in the tech industry. It's the perfect opportunity to explore that gender imbalance and the related abuse of power. But that opportunity is completely blown, and instead, Kimmy gets to be the bad guy.

The rest of the first half of the season redeems itself, however. Kimmy embarks on a mission to educate young boys on how to treat women with respect, and realizes that fairytales don't always leave princesses and princes with happy endings. So although the #MeToo jokes of Episode 1 get the gears turning in the right direction, there are definitely more thorough bits that actual propose better solutions to real world issues.