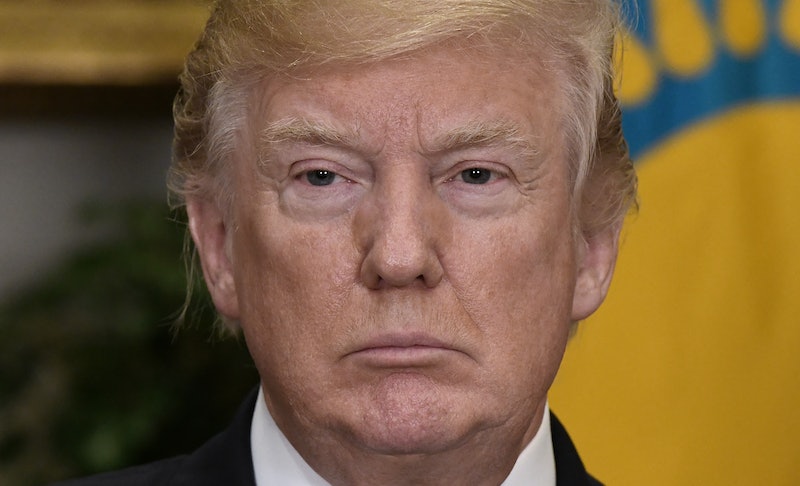 White House physician Ronny Jackson went into quite some detail with the media about Donald Trump's physical results on Tuesday. In addition to suggesting that the president get more exercise, lose "10 to 15 pounds," and try a healthier diet, he shared Trump's weight. At six feet and three inches tall, he said Trump weighs 239 pounds — and that apparently stunned a few folks who thought Trump looked heavier than the number Jackson threw out. This "girther" movement fat-shamed Trump online over the next 24 hours, but their jump to ridicule the president may backfire in a way they probably never considered.

How did the term "girther" come to be in the first place? On Tuesday MSNBC's Chris Hayes tweeted, "Has anyone coined 'girther' for those who believe the president weighs more than his doctor reports?" Hayes clarified that his intention was not to fat-shame Trump, but to point out that the term "girther"— which rhymes with Trump's very own "birther" movement that falsely alleged former president Barack Obama was born in Kenya — was "about people’s refusal to believe something."

In addition to Hayes, James Gunn, the director behind Guardians of The Galaxy, said he would give $100,000 to a charity if Trump stepped on an "impartial" weighing scale. Other social media users tweeted side-by-side pictures of Trump and former NFL quarterback Colin Kaepernick, who apparently weighs roughly the same amount.

There's a problem with this focus on the number on Trump's doctor's scale: people who are mocking him are simultaneously conveying their alienating opinions about how much a person should weigh. Some social media users shed light on that issue: Twitter user Claire Willett urged, "Can we, for real, not fill the whole internet with jokes about the president's weight today? Your friends who don't have size-zero bodies are now learning what you really think about them. Can we roast him without being ableist and sizeist? I feel like we can, guys!"

While some tried to justify their ridicule by saying their mockery was about Trump's vanity and dishonesty, there are surely more productive ways to get one's criticism of the president across. Twitter user Anne Theriault said, "There are lots of other ways to point those out that aren’t harmful to fat people in general, though!" And she has a point: if you want to criticize Trump's vanity or dishonesty, simply take a look at his policies.

As Jacy Gomez wrote for The Hill, fat-shaming Trump is misguided and ultimately unproductive. It yields little to no positive change for any vulnerable person or minority group. It comes across as base, petty, and uncreative; but perhaps worst of it all, it alienates those who aren't traditionally portrayed as beautiful in the media or in society.

It may be hard for some critics to resist the easy Trump fat jokes in this case. After all, the president has mocked a reporter with a disability, mimicked East Asian political leaders, shared disparaging and sexist remarks about Latina Miss Universe Alicia Machado, called Sen. Elizabeth Warren "Pocahontas" at an event for Navajo veterans, defended white supremacists as "very fine people," and much, much more. The temptation to stoop to that level is strong.

But this is where Americans can mark themselves as different than Trump: they can focus on fundamentally important issues, like his domestic and foreign policies, over the cheap hit. Those are the things that matter and that affect Americans in the long term. While Trump himself is no bastion of progressive values, it's important for people to commit to clearly assessing other important and immediate subjects related to the president. His weight is not one of them.