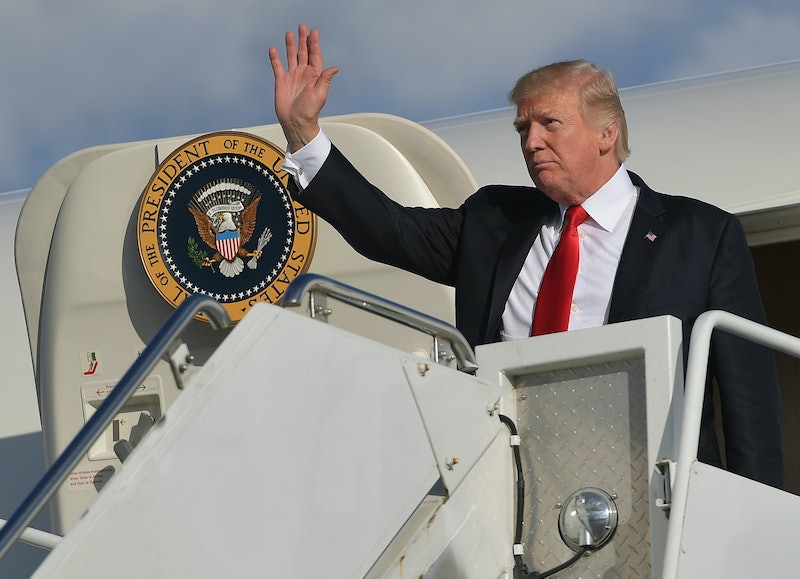 The news has hit all sorts of new lows in the past year, but don't let that you stop you from appreciating what's happening now. The hashtag "Trump's a white supremacist" is trending on Twitter as of Monday morning, and every passing minute is bringing in more very sound reasoning as to why the United States president is, indeed, a white supremacist.

The reasoning is varied, and it's not exactly new. Some of it hearkens back to the way the KKK supported Trump's candidacy and then celebrated his victory — not forgetting, of course, that Trump was reluctant to condemn the KKK and its former Grand Wizard David Duke even during the campaign.

As if it wasn't enough of a signal that he couldn't immediately distance himself from the white supremacist that almost every American has heard of, this line of reasoning became even more salient when Trump didn't immediately condemn white supremacy in the wake of the Charlottesville violence in August. This response, of course, is hardly lost on today's Twitter commentators.

Several of the posts also mention Trump's longer history of racism, beginning with his treatment of the Central Park Five and leading up to his insistence throughout Obama's presidency that Obama wasn't a U.S. citizen. With Obama, it wasn't just birtherism; it was a continued charge against Obama's achievements with the racist undertone that Obama couldn't possibly have accomplished everything that he had accomplished, whether it was writing a book or attending a prestigious university.

This, Twitter says, was always Trump showing the world who he was: a racist.

Some are taking a more tongue in cheek stance, offering photos with Trump surrounded by exclusively (or almost exclusively) white people as "proof" that he's a white supremacist. While no one would exactly call this the best argument, it does run a good counter to the "proof" that Trump's supporters are using to counter the hashtag — that is, photos of Trump with people of color, or people of color supporting Trump.

The fact is, Trump has a long history of racism, and he hasn't backed away from it since becoming president. Instead, he's courted his farthest right supporters, refused to immediately and forcefully denounce literal Neo-Nazis, named the whitest cabinet in decades, and brought the guy who led Breitbart News to become the "home of the alt-right" into the White House in a leading role. Steve Bannon may be gone now, but his ideas live on in the Trump White House, not least through other people who have a habit of making racist statements and who Trump surrounds himself with, like Attorney General Jeff Sessions.

Having #TrumpsAWhiteSupremacist trend on Twitter is a reflection of how one side of the country is feeling about the president, certainly — but this sentiment has been bubbling up elsewhere over the past several weeks, and it's unlikely to die down any time soon. Joe Biden said it, Ta-Nehisi Coates said it, Miss Texas said it, and now hundreds of Twitter users are chiming in as well — all without hearing an apt defense from either the president himself or those who speak for him.

We can remain open to the idea that we might get more of a defense from that side — but for now, Twitter is having its say.

More like this
For These Abortion Clinic Volunteers, Going TikTok Viral Is A Risk Worth Taking
By Audra Heinrichs
YouTuber Runs Into Margaret Sanger’s Grandson While Filming
By Alexis Morillo
White Eyeliner Dots Are The Cutest Summer Makeup Trend On TikTok
By Olivia Rose Ferreiro
American Girl Doll Memes Are Going Viral On Instagram & Tiktok
By Emma Carey
Get Even More From Bustle — Sign Up For The Newsletter