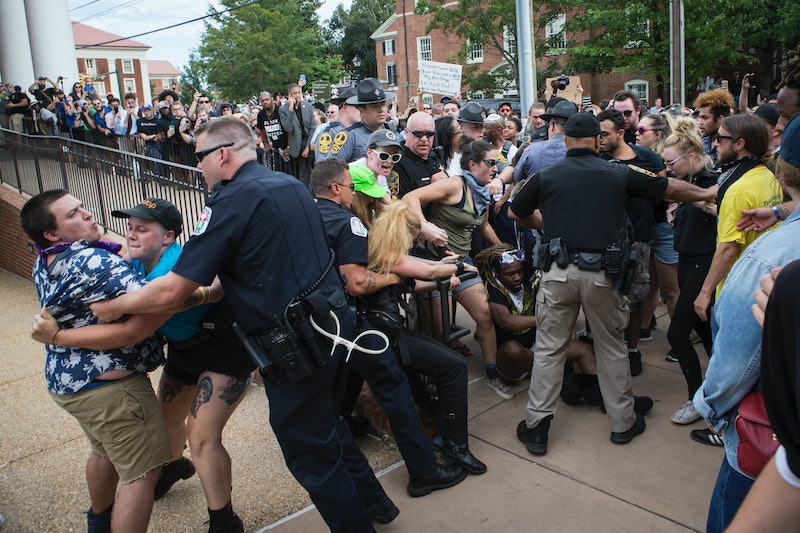 White supremacists sporting Nazi flags and Make America Great Again hats stormed the streets of Charlottesville, Virginia on Saturday. The march quickly turned violent — one person was killed and nineteen were injured when a car slammed into a group of counter-protesters. The governor has declared a state of emergency, but President Trump's response to the Charlottesville violence was reprehensible and dangerous. It may even encourage more violence from white supremacists.

Just to be clear, this was a pro-white supremacy march launched by white supremacists. That's not in dispute: Attendees organized and promoted the march on neo-Nazi websites (which I won't to link here), held flags with swastikas and Ku Klux Klan imagery, and chanted things like "Jews will not replace us" and "go the f*ck back to Africa." The ostensible purpose of the march was to protest the removal of a statue of Robert E. Lee, who fought to preserve slavery during the American Civil War.

That's the context against which this march took place. And how did Trump respond?

"We're closely following all of the terribly events unfolding in Charlottesville, Virginia," Trump said in brief speech in New Jersey. "We condemn in the strongest possible terms this egregious display of hatred, bigotry and violence on many sides. On many sides."

You'll notice that Trump pointedly refused to name white supremacy or white supremacists as the source of this violent conflict. Instead, he stressed that the bigotry and hatred is present "on many sides."

This wasn't accidental. Trump also addressed the Charlottesville violence in two tweets, and in neither of them did he mention white supremacy. Most revealingly, after the speech was over, a reporter asked Trump if he "want[s] the support of these white nationalist groups who say they support you."

Although the president could have easily just said "no," he instead shook his head, ignored the question and walked away.

By refusing to even speak the words "white supremacy," let alone condemn white supremacists, Trump sent a very clear message to his supporters, his detractors, and everybody else in between: Under the Trump administration, white supremacists will not be condemned by the president of the United States.

Needless to say, that's an extraordinarily dangerous message for the president to send. It communicates to white supremacists — and only white supremacists — that they have a friend in the White House, and thus the tacit support from the federal government. And when you know the president has your back, that emboldens you to do things you might not have otherwise done.

Unfortunately, this is the message Trump has been sending neo-Nazis for over a year, both before and after being elected president — and as evidenced by the enormous turnout for the Charlottesville march on Saturday, these dog whistles are having their intended effect.

In February 2016, Trump was endorsed by David Duke, the former Grand Wizard of the Ku Klux Klan and probably the most famous neo-Nazi in the country. Rather than announcing that he didn't want the support of a Holocaust denier, Trump feigned ignorance and accepted the endorsement.

In July 2016, Trump tweeted out an anti-Semitic meme (it featured the Star of David superimposed onto a pile of money) that originated on a prominent alt-right message board, and his final campaign video was criticized by many as an intentional reference to anti-Semitic conspiracy theories.

After his election, Trump hired Steve Bannon, a hideously racist man who reportedly didn't want his children to attend school with Jews, as his top advisor. A month after Trump was sworn in, he told a Jewish reporter who inquired about anti-Semitic hate crimes to "sit down," and said that it was "not a fair question." He did not condemn anti-Semitic hate crimes.

As a result of these and other actions, Trump is very popular amongst neo-Nazis. This was clear in Charlottesville on Saturday, when his supporters chanted "Heil Trump!" and gave the Nazi salute. It was clear even before the march, when white nationalists did the exact same thing at a conference in Washington, D.C. in November; Trump responded to that conference by saying that he "denounce[s] racism of any kind," again refusing to specifically name neo-Nazis. And it was clear even before that, when the leader of the Virginia branch of the KKK said that the organization supports Trump because, and this is an exact quote, "a lot of what he believes, we believe in."

Now is a good time to note that Trump's response to Charlottesville, in addition to being a tacit endorsement of white supremacist violence, is also hypocritical.

"Anyone who cannot name our enemy, is not fit to lead this country," Trump declared in a September speech. "Anyone who cannot condemn the hatred, oppression and violence of radical Islam lacks the moral clarity to serve as our President."

The message Trump sent on Saturday, though, was that this standard doesn't apply when the the "enemy" is white supremacy. It applies only to "radical Islam" — even though, according to the Government Accountability Office, far-right extremists have committed almost three times as many deadly terrorist attacks in the U.S. since September 11th as have Islamic extremists.

In totality, Trump's remarks about white supremacy paint a very clear picture of where he stands. By refusing to denounced white supremacist violence while eagerly condemning other forms of violence, Trump is sending the message that violence committed by white nationalists is okay — or at least, more okay than violence committed by people of color. That kind of encouragement was on full-display during Trump's campaign, and as the huge turnout for the neo-Nazi rally in Charlottesville demonstrated, it succeeded in bringing white supremacists out of the shadows and into the streets.

"I would recommend you take a good look in the mirror & remember it was White Americans who put you in the presidency, not radical leftists," Duke wrote on Twitter.