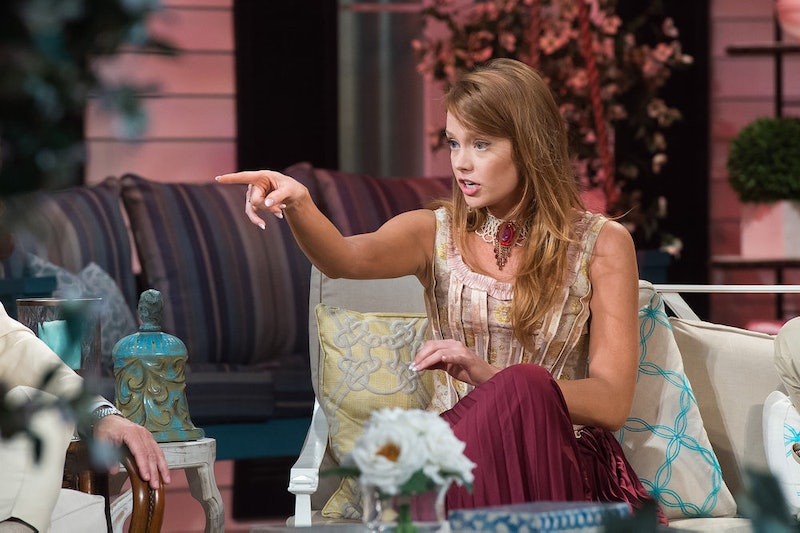 The relationship between Kathryn Calhoun Dennis and Thomas Ravenel has always been a fraught one on Southern Charm, and after seeing the premiere of Season 4, I have to say that it looks, oh, as bad as its ever been, partly because Kathryn is just getting back to Charleston after a stint in rehab. Why did Kathryn Calhoun Dennis go to rehab on Southern Charm? (Bustle reached out to her rep for comment, but has not yet received a reply.)

Well, it seems like this is a condition of Kathryn and Thomas’ endless custody battle over their kids. From what everyone on the show said in the premiere, Kathryn allegedly failed a drug test during the custody proceedings, and that allowed Thomas get custody pending Kathryn going to rehab and passing the drug test. There’s no proof in the premiere episode that anything that Whitney or Patricia or Shep is saying is true, but my guess is that Kathryn would not go to rehab in California, away from her children, just for fun. She would be doing it to get her children back, right? Whatever the case, little inklings of Kathryn’s alleged drug abuse came as out as far back as the Southern Charm Season 3 reunion when Landon called out the fact that Kathryn had allegedly failed a drug test and claimed Thomas had the paperwork to allegedly prove it. Kathryn vehemently denied this on the reunion and left the stage, saying that she didn’t want to be “slandered.”

In a recent interview with Entertainment Tonight, Kathryn expressed her desire to move on, and she also talked about how much better she felt after her rehab experience. “You know, it's been a long haul,” she said. “But I feel more me than I've ever felt in a long time.” Kathryn mentioned that filming Season 4 of Southern Charm was the first season she's ever filmed sober, and that the whole season would be different because of it. “It's been wild, but a great experience,” Kathryn admitted. “That's gonna be through fresh eyes, and I think that it'll provide some new perspective, probably, on these people and on these situations that we have, and Charleston in general.”

At the end of the day, this is none of Landon’s (or anyone else on Southern Charm) business. So much of the back-and-forth on Southern Charm has to do with everyone talking about Kathryn behind her back, and frankly, I hate it. What Kathryn needs post-rehab is support, not idle gossip. Luckily, it seems like she's on the right path. “I'm really at peace with everything,” Kathryn told Entertainment Tonight. “Chaos is out of my life, luckily. And, I have two beautiful babies. What else could you really wish for?”