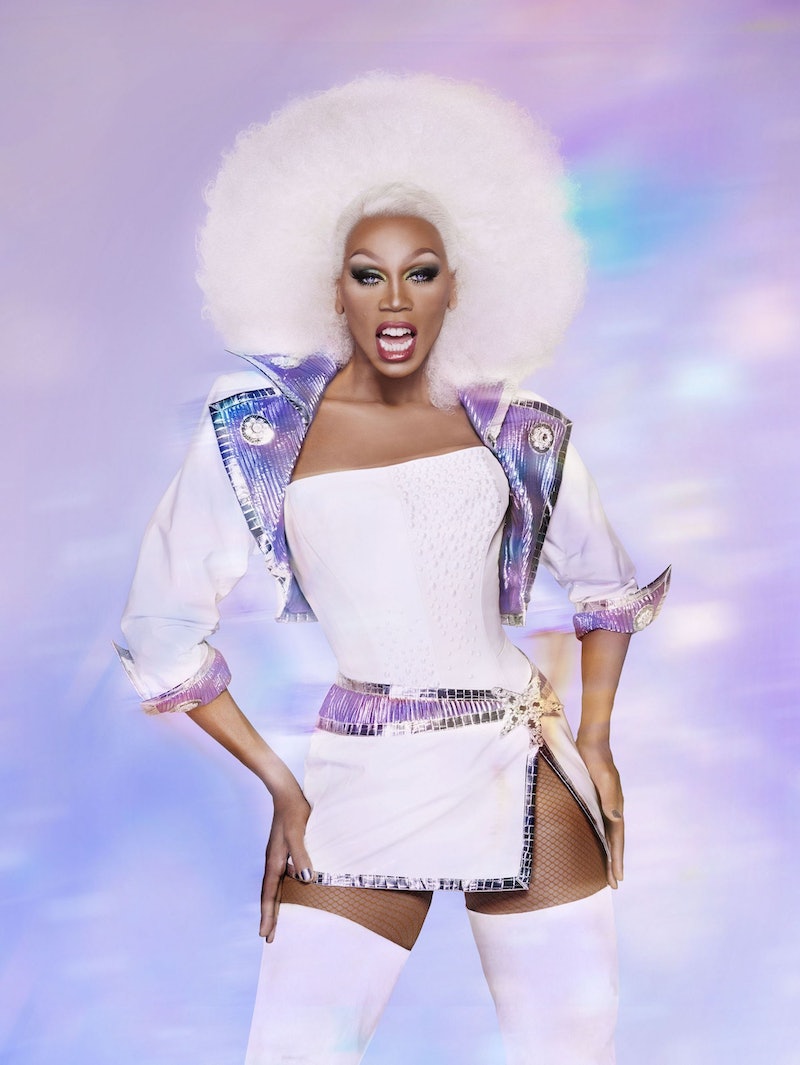 You can always count on Drag Race to bring the drama, but the Jan. 11 episode of All Stars 4 took it to a whole new level. After the week's top two queens, Monèt X Change and Manila Luzon, lip-synced for their legacy, everyone nearly fell out of their heels when Ru told them no one was going home — arguably the biggest cliffhanger ever included on the show. Unfortunately, it wasn't explained why no one was eliminated on All Stars 4, so realistically, fans will have to wait until the next episode to find out. But it definitely feels like Ru has something maniacal up his sleeve.

Usually one twist or turn is enough to keep viewers intrigued for one more week, but this episode was chock full of them — so much so, that it was hard to keep up. First, after the judges' evaluation of a Lady Bunny funeral full of roasting Ru-logies and an angelic white-themed runway, Ru said, "If you're not in the top, you're in the bottom." That put four queens on the chopping block instead of the usual two.

But they weren't actually on the chopping block, because Ru knew all along that no one was going home. The queens thought they'd had enough surprises, until they returned to the werkroom and were beyond gagged to discover Latrice Royale, Gia Gunn, Farrah Moan, and Jasmine Masters raised from the elimination graveyard.

So why did Ru bring them back? No one knows at this point, and it's obvious that the remaining queens were just as shook as viewers are now. Is the competition starting over? Are they just appearing for dramatic effect? They could be back for a number of reasons, and whatever it is, it better be good. The only hint of an explanation was scrawled in red lipstick on the werkroom mirror by RuPaul himself: "Get ready to lip-sync for your life, life, life, life, life."

If that means what it implies, the rules of the traditional Drag Race could be put into place, meaning the all-stars no longer hold the decision-making power — Ru does. And if he's using that power to resurrect four eliminated queens, this just became an entirely new game.

One thing's for sure, none of the queens looked happy to be back: they were dressed in what would've been their challenge funeral attire, and they seemed ready to haunt some b*tches. It's not clear who's going to be lip-syncing for their lives. It could be the bottom four — Monique, Trinity, Valentina, and Naomi — or it could be the deceased four. Maybe Ru will give the eliminated a chance to lip-sync for their redemption and allow one of them to return to the competition for good.

It seems ironic that a potential savior storyline comes up immediately after Latrice's elimination. The queens made it obvious that no one (except Monique) wanted to send her home because she already emanates such legendary, all-star status. Even she called herself the dearly beloved, and she has said before that the only reason she returned to All-Stars was to collect the crown she already earned. Could this be her way of doing it? That narrative would seem awfully manipulated and produced, but the Holi-slay Spectacular made it clear that Ru isn't above that.

Let's just hope that this season of All Stars doesn't end like the holiday special did, because someone, whether or not it's Latrice, needs to win.