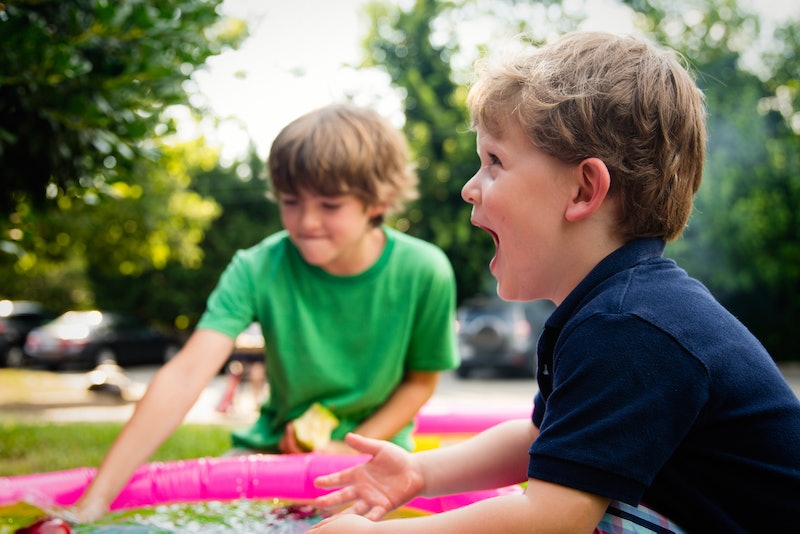 Pexels
By Lara Rutherford-Morrison
May 16, 2017

In recent months, it’s become common to see writers and pundits describing Donald Trump as a child. In fact, only yesterday, The New York Times published an op-ed, titled, “When the World Is Led by a Child.” But Feminista Jones argues that we need to stop comparing men to children when we discuss bad behavior. In a series of tweets this morning, the author, social worker, and community activist claimed that when we compare men (and especially Trump) to children, we are absolving them of real responsibility for their actions — and doing a disservice to kids in the process.

Jones’ tweets came in reference to yesterday’s NYT article, written by columnist David Brooks. In the article, Brooks described Trump as “a 7-year-old boy desperate for the approval of those he admires.” He also said that Trump is an “infantalist” and that “[i]mmaturity is becoming the dominant note of [Trump’s] presidency….”

Brooks is far from the first person to reference children and childishness when discussing the president. In an interview with the then-nominee in March of 2016, Anderson Cooper told Trump, “Sir, with all due respect, that’s the argument of a five-year-old,” when Trump responded to a question about his conflict with Ted Cruz with the excuse, “I didn’t start it.” A month after Trump won the election, Dave Eggers wrote in the ­Guardian, “[W]e must also agree that this president has the bearing and impulses of a nine-year-old boy — a troubled nine-year-old boy. … He has no patience and little self-control. He cannot spell and does not read.”

The comparisons continued after Trump took office. In January, Chris Cillizza wrote in The Washington Post, “Time and again, the image of Trump pushed by his ‘aides’ is one of a clueless child…” In a March opinion piece for CNN, Trump biographer Michael D'Antonio pointed out that the president himself has furthered the connection, telling D'Antonio in 2014, “When I look at myself in the first grade and I look at myself now, I'm basically the same. The temperament is not that different.” D'Antonio’s article was titled, “President Trump: A 6-year-old with nuclear weapons?”

The comparison of Trump to a child is compelling — he has, after all, repeatedly demonstrated impulsiveness, a lack of preparedness, and an almost obsessive concern with what other people feel and say about him. But is “Trump = Adult Child” really the best analogy?

Feminista Jones thinks not. In a May 16 tweet, Jones wrote, “I'm not at all a fan of likening incompetent men to children. It almost excuses their behavior. Make them own it!”

In ensuing tweets, Jones argued that labeling certain men as “children” puts distance between (adult) men and their actual actions. “It's the ‘Real men" vs 'Boys’ argument, which I hate,” she wrote. “We struggle with accepting that 'real men' are capable of being pure trash.” Jones continued, "[S]ociety has a very real problem in its inability to admit that maybe men are not inherently the best leaders ... So when men act petulantly, immaturely, or screw up in major ways, we are quick to call them 'children', which is wild bc WE mold children."

Jones pointed out that this dynamic isn't very kind to kids — they don't need to be lumped in with poorly behaved adults — and, she argued, it places the onus for adult men's behavior on other people, forcing others into the role of "caretaker" for grownups who should be able to manage themselves.

I can’t imagine that the “Trump is an 8-year-old boy”-style headlines will go away any time soon, given the chaos that keeps emerging from the White House, but Jones’ Twitter thread illustrates why people may want to take a moment of pause before jumping on the bandwagon. A child who acts without thinking is still developing and can’t be held fully accountable for his or her actions. An adult who does the same doesn’t have that excuse.

More like this
Is TikTok’s “Villain Era” Trend Just An Excuse For Bad Behaviour?
By Chanté Joseph
TikTok Is Using A Kendrick Lamar Song To Post Thirst Traps
By Courtney Young
Instagram Users Are Reporting Issues Scrolling & Logging In
By Courtney Young
What Does “Gatekeeping” Mean On TikTok? The Viral Term, Explained.
By Courtney Young
Get Even More From Bustle — Sign Up For The Newsletter