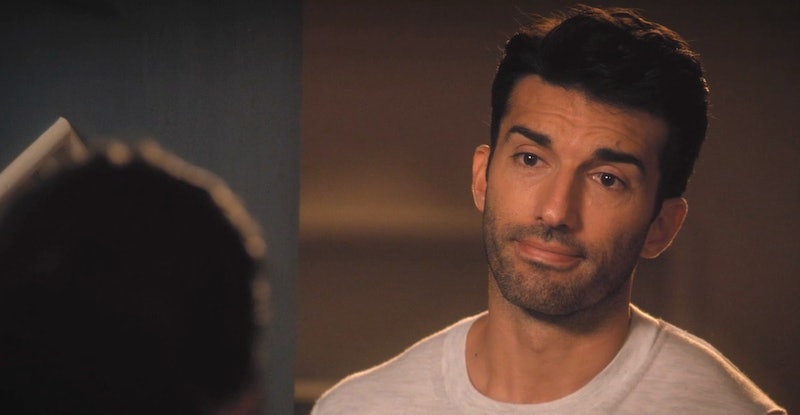 Spoilers ahead for Jane the Virgin Season 5. After living through an epic love triangle for seasons on end, Jane finally decided who she wants to be during "Chapter 88" on Jane the Virgin. Yet, just because she chose him over Michael, Rafael doesn't take Jane back. After her trip to Montana made her realize she doesn't want to be with her not-actually-dead husband, Jane rushed back to Miami to tell Rafael. But he rejected her, saying, "I'm sorry, it's just too late. I just don't trust you anymore, Jane. And I can't go back." Rafael gave Jane his reason, but if you're still feeling forlorn or like that's not good enough — take some comfort knowing it's all a bigger part of Jane's narrative.

Jane ended "Chapter 88" not entirely upset over Rafael not taking her back. Instead, she was resolved to "fight for him because Rafael is my destiny," as she told Xo. Yet, viewers might not be as optimist as Jane since Rafael's response was kind of harsh ... especially considering Jane needed time since her husband had just come back from the dead. But Rafael's decision is not just about this one instance. Instead, as "Chapter 85" showed, it's the fact that Jane has chosen Michael over him before. "Waiting for you to pick Michael almost killed me," Raf told her after Michael got his memories back. And now Jane is left alone dealing with the fallout of all their previous back-and-forth.

However, Rafael is kind of forgetting that time he broke up with Jane in Season 1 after she had chosen him over Michael. Rafael was going through a tough time — you know, with his father being killed by his stepmom and discovering that his mother had taken $10 million to walk away from him when he was a child. So because he didn't think he could be there for Jane emotionally, he lied and told her he didn't really love her.

Rafael broke Jane's heart back then and she reciprocated in Season 2 when she chose to marry Micahel. But the point is that Jane and Rafael's relationship has been a rollercoaster — and they are usually accompanied by Michael on this ride. So it's just a bit frustrating that something as completely unexpected and out of control as Michael not really being dead is the dealbreaker for Rafael.

While this might mean that the rest of the series will be Jane trying to win back Rafael, there are still 12 episodes left in the season. So that means anything could happen — even *gasp* the prospect of Jane not ending up with anyone. But, if you believe showrunner Jennie Snyder Urman, Jane won't be flipping back to Michael ever again. After "Chapter 88," Snyder Urman told TVGuide, "Jane really realizes that these five years and the changes that have happened have changed her, and Rafael is who she wants to be with. Whether he feels the same way is going to be up in the air, but that's where her heart is. ... Jane knows who she wants to be with."

Snyder Urman also said that Rafael denying Jane means the end of the series will finally show Jane in a scenario she's not accustomed to — being rejected by a love interest. "That's a big moment for her, when she realizes that that's not her choice right now. It's his choice and she has to respect where he is," Snyder Urman said. "Right now, it's very painful for him to be around her and it's not what he wants. So it's a different dynamic as we build up until the end, and it sort of sets the course for a lot of character development and also a lot of drama and comedy."

Besides Snyder Urman telling TVGuide that the writers wanted to explore Jane not instantly getting what she wants romantically, another reason why Rafael isn't taking Jane back right away is that it makes for good TV. This is the final season of the telenovela and it would have felt too simple if Rafael simply accepted Jane back after being hurt by her. So even though you might be mad at Rafael for not taking back Jane, there is a reason for it and it should lead to a dramatic — and hopefully, romantic — end to the series. Well, at least for #TeamRafael.