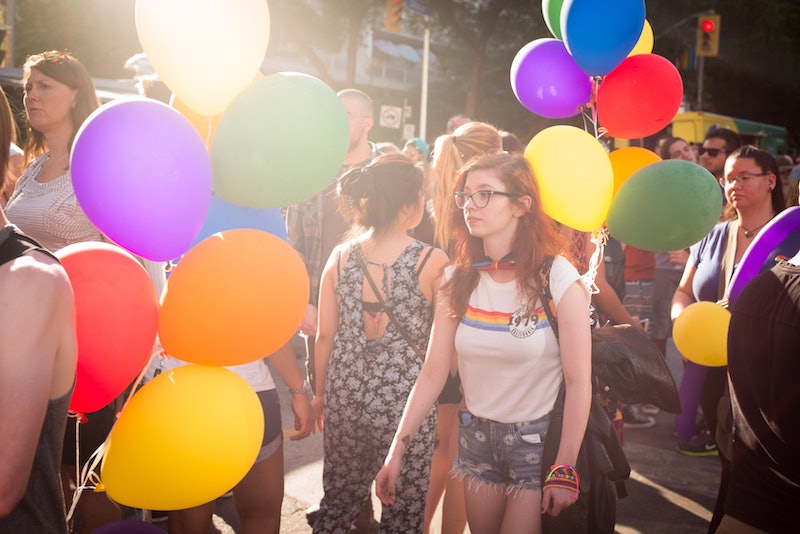 It's been a difficult year for the LGBTQ community. A Vice President with a horrific record of queer rights, Trump's withdrawal of transgender bathroom protections, not to mention the general galvanization of hate made possible by the current political climate. It's a scary time for queer folk. But Pride is here. And it's important that you still celebrate.

In part, because it's so important to give a voice for the very voices being threatened by this administration. There has been a huge momentum behind trans issues and acceptance recently — and we can't let the political climate put a stop to that. "The transgender movement is finally finding its voice after decades of suppression and oppression from heteronormative society," author and activist Kelsie Brynn Jones tells Bustle, "and even exclusion by the mainstream gay organizations of the past." All the more reason why we should be out celebrating and supporting the movement. In the face of the current administration.

And it's not just that, we need to remember the roots of Pride, remember Stonewall, and think about just how far we've come. We can't let anything get in the way of that.

Because There Will Always Be Something

Unfortunately, it's not the first or last time Pride has been hampered by current events. Even last year, in some places Pride felt subdued. I went to my first London Pride not long after the horrific Pulse Orlando attack, where 49 people were killed and 53 others were wounded. This hate crime gave Pride a sort of bittersweet feel. But people still celebrated. They still danced. They resisted and the defied. It may have been with heavy hearts, but they still danced.

The political climate and the current events, may make Pride subdued, but it's also what makes it so important. Unfortunately, hostility toward the queer community and even hate crimes are not uncommon. That doesn't mean we should be blasé, it means that we need to be all the more resistant, demonstrative, and celebratory. It means singing loud enough and dancing wildly enough to give a massive eff-you to the very people who threaten and endanger our lives and happiness. It means making it so crystal clear that love wins.

Which means that not only should you not let politics hamper your pride, it means that we need to draw together even stronger. It means that groups often on the outskirts of the queer community — like bisexuals and trans folks— need to be welcomed with opened arms. It means allies need to fight harder and stronger. Because there is enough hate and division happening outside of the queer communities, enough threats to everyone. We need to band together in the face of it.

It's easy to let the political climate get you down. It's causing real stress and it sucks. So experience those emotions, let yourself be upset and angry and frustrated. But take a day to celebrate, to be joyful. And to do it all in the face of them.