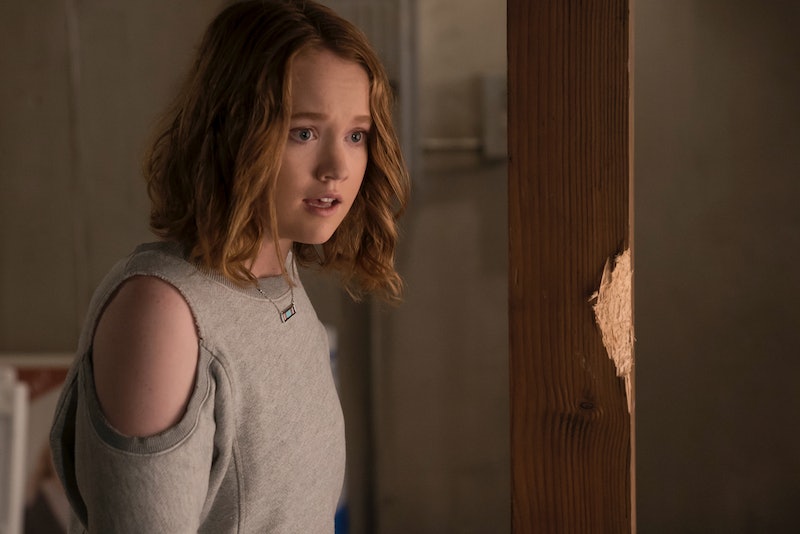 Spoilers ahead for Santa Clarita Diet Season 3. Usually it's Joel and Sheila that have to worry about being caught by the authorities considering that they're, you know, murdering people and Sheila's eating them. But in Season 3 of Santa Clarita Diet, Eric and Abby could be caught by the FBI for blowing up a fracking site in Season 2. When Abby first pitched the idea to Eric of blowing up the site together, she told him that she was tired of people doing whatever they wanted and getting away with it. But now it seems like those words have come back to bite her.

In the first episode of Season 3, Eric and Abby are on a high. Their explosion caused the fracking company to halt operations until they can figure out what happened. It's a win for Abby's newfound love of environmentalism. Soon, though, that excitement comes crashing down because they learn that the incident is being treated as a terrorist attack. That means the FBI will be coming in to investigate. What's more, the FBI quickly narrows suspicion to Abby and Eric's school — specially the environmental club of which they are both members. When FBI Agent Tess Rogers (played by NCIS: New Orleans star Shalita Grant) announces that she'll be conducting interviews with each student in the club, Abby and Eric panic.

They quickly concoct an alibi that has them together at Eric's house watching Lord of the Rings on the night in question, but Agent Rogers is still suspicious. Not of Abby — but of Eric. The FBI had dug up the chemical footprint of the C4 used in the explosion and it traced back to Eric's late stepdad Dan's C4. So, Agent Rogers (rightly) suspects that Eric was involved.

In a last ditch effort to throw the FBI off of their tail, Abby and Eric finally fess up to Sheila and Joel, who step in to help. They decide to pin the blame on one of Sheila's already-dead victims. Together, Abby's parents blow up another fracking site and leave the man's body there so police will think he died starting the explosion, and that he'd also done the other one. It works.

In the process of all of this, however, Eric's mom discovers what Abby and Eric did. She finds the C4 and gets rid of it to save Eric, but she makes Abby promise to stop involving Eric in this kind of dangerous stuff. So for a couple of episodes, Abby complies. But Eric doesn't like being frozen out. He makes a case to Abby about how they need each other and that he wants to help her — she isn't forcing him to do anything. Still, if Eric's mom finds out that Abby and Eric are still doing dangerous things together, she could take matters into her own hands and rat out Abby in an attempt to separate them for good. They may have escaped prison in Season 3, but a potential Season 4 could see that threat looming once again. The Hammond family members are never safe and secure for long on this show.