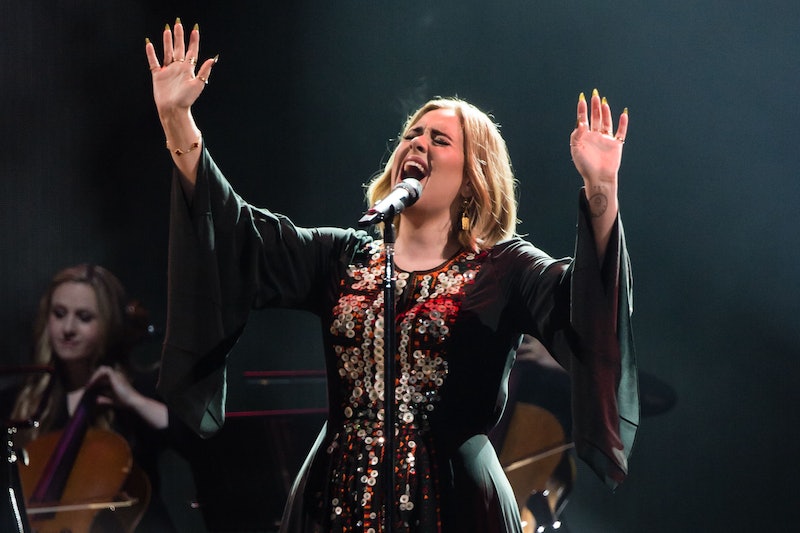 Whenever Adele decides to treat the world with new music, the 30-year-old can't help but takeover the entire music industry. The British singer's previous two albums achieved overwhelming worldwide success, and Adele has since gone on to become one of the most powerful artists of a generation. Unsurprisingly, fans around the globe flock to see the "Hello" singer perform whenever she embarks on a live tour. But will Adele tour the UK in 2019?

Well, there currently has been no official announcement in regards to a 2019 tour. Bustle have reached out for comment, and will update you with any information once it becomes available. Usually, the Grammy award-winning superstar goes on tour in support of her latest album, and according to the Telegraph, Adele's follow up to 25 could be on its way sometime in 2019. Exciting stuff. The newspaper claims the singer has returned to her hometown of London from the U.S., where she had previously resided. The report goes on to say "She’s back in the UK and intends to write here. A number of studio musicians have been approached to work with her and she’s already penned some of the songs."

As previously reported, Adele's last album 25 was released back in November 2015, a few weeks after the surprise release of lead single "Hello." Despite taking a three-year break from music, the single went on to break records, however, the accompanying stadium tour left the "Rolling in the Deep" singer with vocal cord damage. Adding to the worry of fans was Adele's recent decision to close her touring firm, Remedy Touring LLP, in spite of its massive success, reports Capital FM. Previously, the Brit award-winner performed a staggering 121 shows during her most recent world tour — but was forced to cancel the final two shows at Wembley Stadium in London. In a statement released at the time, she said: "I simply am unable to perform over the weekend. To say I’m heartbroken would be a complete understatement. I’m already maxed out on steroids and aids for my voice."

During the tour, Adele made a heartfelt speech to her adoring fans which addressed her own touring anxiety, and desire to impress her loyal fanbase. Speaking on stage, Adele said "Touring isn’t something I’m good at. Applause makes me feel vulnerable. I don’t know if I will ever tour again. The only reason I’ve toured is you. I know I come across as very anti-fame and anti all that and it’s because I am. It’s because I want to surprise you."

Not all hope is lost, however, because the "Chasing Pavements" vocalist continued on to state that she does intend to return to music. She added "I want the element of surprise for every time I come back and it’s so hard to maintain that. I am going on break and I am just going to be a mum for a bit and I’m looking forward to that, but I’ll always write music and I’ll always put it out and I hope that you’ll be here."