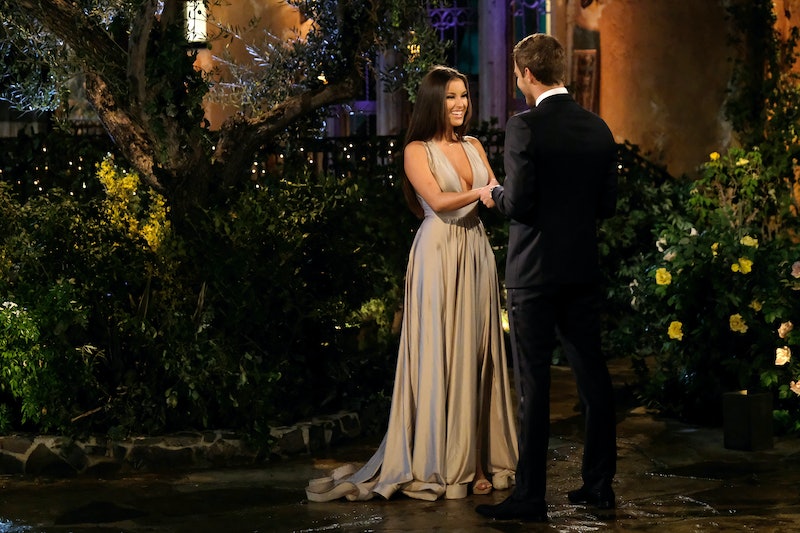 It's only three weeks into his Bachelor season, but Peter is already starting to have doubts. Despite being eliminated in an emotional rose ceremony on Monday night's episode, Alayah appeared to rejoin Peter's Bachelor season in the preview for the upcoming Jan. 27 episode. And it may not just be to clear up the drama.

Alayah made a strong connection with Peter on the first night, after she gave him a letter that her grandmother wrote to him. However, the other women in the Bachelor Mansion weren't as enamored with Alayah as Peter was — particularly Sydney, who told him after the pillow-fight group date that she thought Alayah was fake and manipulative. Alayah tried to defend herself, and for a minute, it seemed like Peter's doubts were put to rest, until he spoke with Victoria P., who revealed that she and Alayah knew each other and that Miss Texas 2019 had asked her to hide that fact from the show's producers.

A shaken Peter felt he had no choice but to send Alayah home, since he didn't think he could trust her anymore. But immediately after she walked out of the mansion, Peter confessed that he didn't "feel good" about the decision he just made. "I feel like I don't want to let her leave," he said. Based on the preview for the upcoming episode, it seems like Alayah might get a second chance to win Peter's heart.

In the preview, Alayah crashes a group date in order to, once again, defend herself and her authenticity to Peter and confront her fellow competitors about what they said about her. Given how much regret Peter expressed after the rose ceremony about eliminating Alayah, it's not out of the realm of possibility that he'll reach out and ask her to rejoin the competition. It's also possible that Alayah's return is a surprise engineered by the show's producers, but that it's still enough to sway Peter to ask her to come back.

Naturally, both Peter and Chris Harrison have kept quiet about the potential of an eliminated contestant returning to the mansion. But while announcing the contestants ahead of Peter's season, Harrison did tease that Alayah will have an emotional journey on the show. "Maybe the wildest roller coaster ride of the entire season centers around Alayah. [There's] controversy, emotion," he said, before adding that "something that has never happened before in the history of the show will happen to Alayah."

While there have been quite a few contestants who have competed for the Bachelor or Bachelorette's heart a second or even third time, once people are eliminated at a rose ceremony, they don't usually get to rejoin the competition. Peter has teased that nobody will be able to predict what happens on his season of The Bachelor, and combined with Harrison's hints about Alayah's emotional experience, there's a strong possibility that her elimination wasn't final.

The only thing that Bachelor Nation knows for certain right now is that the rest of the girls competing for Peter's heart will not be happy to see Alayah again.