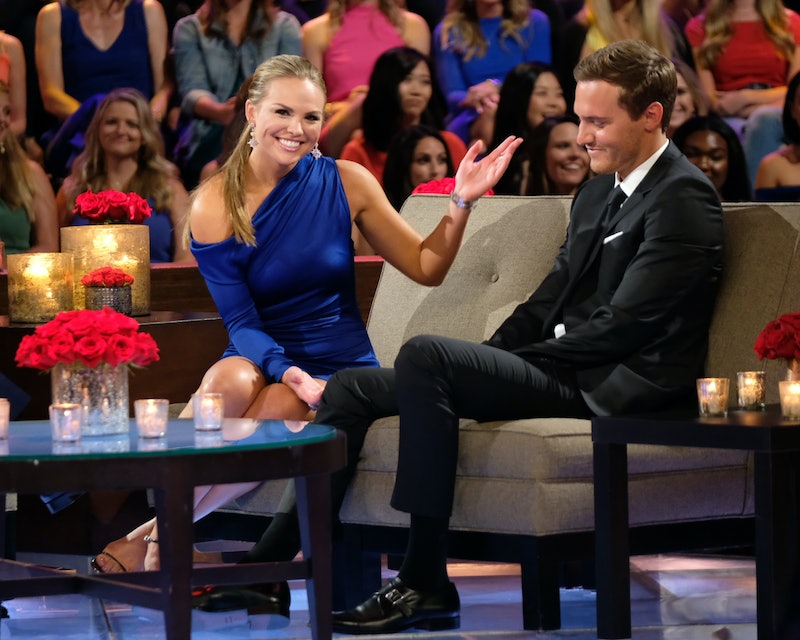 The premiere of Peter Weber's Bachelor season isn't until Jan. 6, 2020, but fans already have an idea of what to expect thanks to the first Bachelor promo that aired during the Dancing with the Stars finale. The franchise's previews are notoriously misleading, so take this with a grain of salt, but ABC seems to want us to believe that Hannah Brown could join Peter's Bachelor season.

During the promo, Hannah shows up and talks to Peter one-on-one. "I'm so confused right now. What are you doing here?" Peter asks her. In response, Hannah seems to say, "[I'm] making decisions for my heart, because I know there's still something there. And I would do anything for a relationship." The "seems to say" is important here, because the promo cuts between scenes of the words coming directly out of Hannah's mouth to clips of other contestants reacting to something shocking.

Because of this crafty editing, it's impossible to tell if that's what Hannah really said, or if her words were spliced together from different parts of her conversation with Peter to make her arrival seem like something more than it actually was. The same goes for Peter's supposed response of, "What I'm about to say is extremely crazy. What would you say if I asked you to come and be part of the house?"

Fans don't get an answer to that question, but the two look very cozy on the couch, so clearly the takeaway is supposed to be that Hannah will end up as a contestant. But how could she have been on Peter's season (which just wrapped filming, like, two days ago) while competing live on DWTS each week? The short answer? She couldn't. Don't read too much into what you saw in this promo. The show very often manipulates footage for previews to tease scenarios that almost never pan out the way they look.

Hannah and Peter may have at one point had a serious relationship (never forget that windmill story), but that relationship is likely over for good. Hannah probably stopped by the show to offer some friendly advice to Peter and nothing more. We won't know for sure until the series airs, but don't put too much stock in this right now.