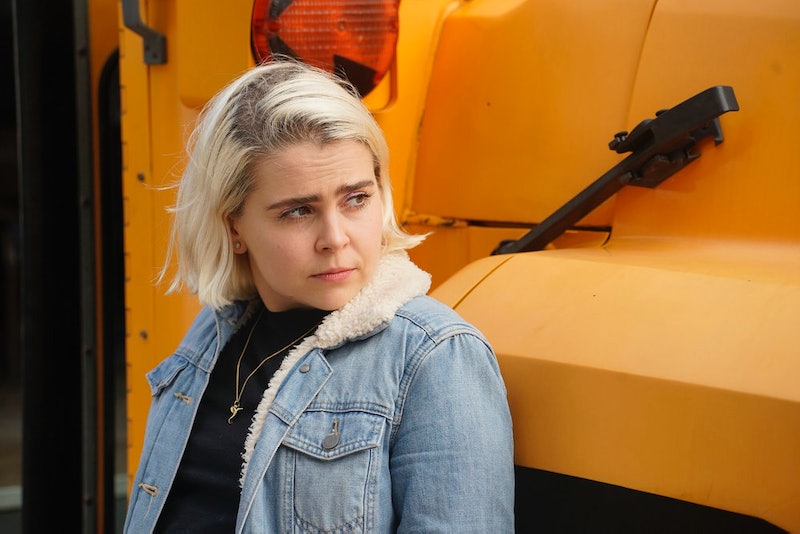 Spoilers ahead for Good Girls Season 2, Episode 9. Fans know Noah on Good Girls isn't to be trusted, but Annie isn't yet in on his secret. In fact, the April 28 episode ends on a cliffhanger that suggests Annie may tell Noah about her crimes. One can only hope she has the sense to keep that part of her life to herself, but Annie can be a loose cannon, she just ordered a bunch of shots, and she thinks that Noah is also a criminal. So really, anything could happen next.

For one shining moment, it seemed like maybe Annie was about to cool things off with Noah. Her ex Gregg had just warned her that Noah seemed a little too interested in Annie and that maybe he was hiding something. "I think we should slow things down with us. I have a kid so I've gotta be careful, you know?" she told Noah while she sat at a bar with him. Noah, who is actually an FBI agent trying to get Annie to incriminate her sister, looked panicked that he'd be losing his source.

When Annie continued, saying she didn't know enough about Noah to judge whether or not he was a good guy, Noah decided to "reveal" something about himself. He told Annie that he'd stolen money from his last job and lied to get his current one. Annie seemed relieved that was the worst thing he'd done (Annie, come on) and she brightened up. "OK, we're gonna need some shots for this conversation, because we are so much more alike than you could ever know," she tells him, a giant smile on her face.

Did Annie mean she wanted to get shots to hear more about Noah's crimes? Or is she loosening up her own tongue to tell him she's also stolen money? Considering how much trouble Annie, Beth, and Ruby have gone through to keep their secrets, it would be a shame if Annie accidentally revealed everything to an FBI Agent. She has to be smarter than that, especially since she's kept her house evidence-free — Noah wasn't able to find anything when he rifled through the place. But if any of the three women were going to accidentally let something slip, it would be Annie.

Mae Whitman, who plays Annie, told Entertainment Weekly that one of the things she likes about the show is that it allows the women to mess up. "They're weird women and imperfect women. We talk about that a lot, that they're messy and they drink too much and they make a lot of mistakes." It would certainly be a mistake for Annie to tell Noah her secrets, but it would also be a very human moment of trying to connect.

However, if she does tell him, he may not turn her in just yet. In the previous episode, Noah admitted to Annie that he "kinda" liked her, and it sounded like he maybe really meant it, even despite the fact he's just trying to get close to her for work. And when Annie seemed close to telling him her secret during Sunday's episode, his face fell a bit. Perhaps he doesn't want to know the truth so he can go on dating her without feeling like he should be turning her in?

In any case, the next episode synopsis and photos don't show Annie (or any of the ladies) in danger of being arrested. Perhaps Annie kept her mouth shut or Noah is just biding his time. Instead, the synopsis says, "With Beth determined to lead a new crime-free life, a desperate Ruby and Annie go behind her back to strike a new deal with Rio."

The episode photos mostly show the three women on some sort of scouts field trip with Ruby's daughter.

Beth is also shown returning to work at the dealership with Dean by her side, and she's seen looking wistful (and/or suspicious) at a Cloud 9 store — the site of her former crimes.

So for now, Annie and co. are seemingly in the clear. But the closer she and Noah get, the more complicated things will be. Is he fully playing her or does he actually have feelings? If it's the latter, Noah could actually be the ladies' (and Stan's) ticket out of this mess. Perhaps he'll use his FBI status to get the feds to target another suspect like Rio instead of Beth. Of course, Noah could really be a full-on bad guy and just use Annie to get to Beth, but honestly, Annie deserves better than that. So fingers crossed that even if she does spill her guts, Noah goes easy on her.