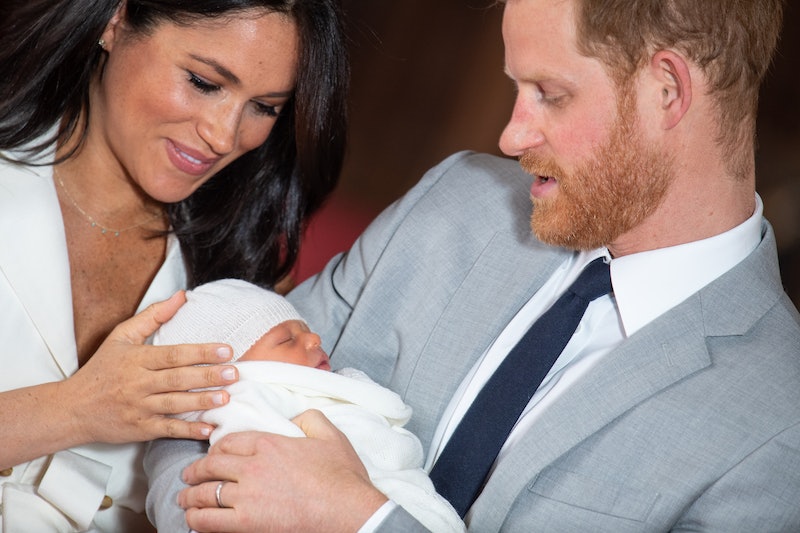 The first half-American, half-English royal baby has been born. His name is Archie, he has a very cute little face, and... that's about all we know. But while we wait to find out more about Archie as time goes on, some fans of his famous parents, Meghan Markle and Prince Harry, might be wondering whether Archie will have an English or an American accent, or whether his accent will change over time. After all, little American kids watching Peppa Pig are saying things like "mummy," so Archie being around his own Californian mummy could affect his accent, right?

The answer is no, not really. (And those kids watching Peppa Pig aren't really changing their accents.) Archie will have an English accent — unless something drastic changes, like his family moves to the U.S. — but his particular situation of having one American parent and one English parent could still affect the way he speaks.

"Babies are born being able to hear and produce all sounds of all languages," Viorica Marian, PhD from the Northwestern University School of Communication tells Bustle. "But by their first birthday their linguistic system becomes attuned to their native language and to the dialect they hear the most."

Marian explains that even though Markle is American and will be spending a lot of time with her son, because he will be around many more English-accented speakers, he'll have an English accent, too. In particular, this has to do with the fact that his peers will be English, because kids "tend to mimic other children."

That said, if a child had two American parents, but lived in England, it would be possible for them to sound more American, if they were exposed to their parents more than anyone else.

"If a child had two American English speaking parents and did not have any other caregivers around who were speakers of British English, then the child might have a dialect closer to American English even if they were growing up in England," explains Susannah V. Levi, PhD, Associate Professor of Communicative Sciences and Disorders at New York University, to Bustle.

While this is clearly not the case for Archie and he will be around English-accented people all the time, including his own dad, Levi explains that the way Archie speaks could be influenced by his American mother, but that the influence would eventually go away. "Because his mother will provide some input that is American English, it's possible that he might acquire something that has some traces of American English, but if he goes to school in the U.K., that will disappear," Levi tells Bustle.

Similarly, but on a bigger scale, people who are raised in one country and then move to another can have their accents change, but the original accent is more likely to stick as a person gets older. "Often if you move to another country after puberty, it's much harder to lose your accent because your articulatory system is attuned to the sounds of your native language," Marian says to Bustle. One's accent can still change at an older age, but this would require more conscious effort.

Archie will likely have an English accent (again, barring any major changes in his life), but both Levi and Marian comment on dialect, as well. Levi says that "at first [Archie] might have a sort of hybrid dialect with some features of American English," but that because most of his input will be from English speakers in the U.K. this will "likely disappear." She adds, "Children are very aware of their peers and pick language features from them."

Marian, on the other hand, suggests that Archie could continue to be "bidialectal."

"If children are exposed to more than one accent consistently and about equally they are most likely going to become bidialectal, so they will likely be able to switch at will between the two dialects and sort of use the appropriate dialect depending on circumstances," she explains to Bustle.

It will be quite some time before we hear Archie talk. (I mean, Prince George is almost six and have you ever heard him speak in the public eye?) But whether you were curious about Archie specifically or he just piqued your interest in how accents work, now you know a little more. Who knows, maybe like the Peppa Pig kids, Markle will show him Sesame Street and he'll be an English-accented kid who says "cookies" instead of "biscuits."

More like this
10 Ways To Be More Empathetic To Your Partner
By Raven Ishak and Lexi Inks
9 Tips For Hosting A Holiday Party In A Small Apartment
By Anna Davies
Why Harry Styles & Olivia Wilde Make A Great Couple, According To Astrology
By Nina Kahn
Bennifer, Kravis, & 14 Other Fun Celeb Couples Halloween Costume Ideas
By Emma Carey and Brittany Leitner
Get Even More From Bustle — Sign Up For The Newsletter