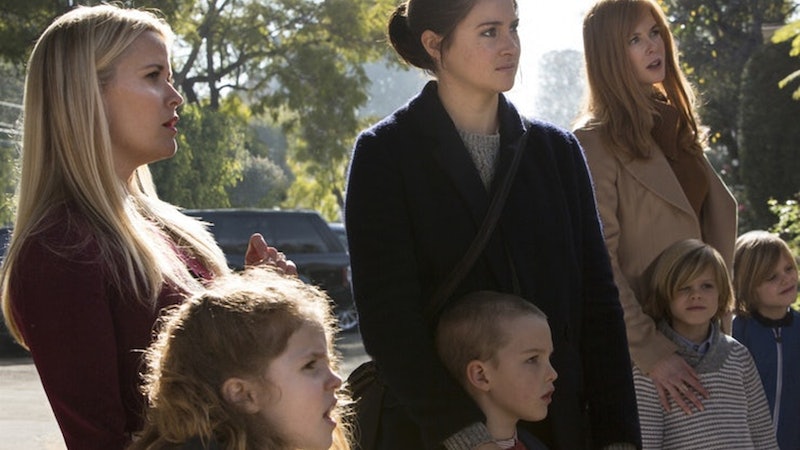 The "Monterey Five" will return to the small screen in June, picking up right where the first season of Big Little Lies left off — but there's still one major mystery hanging over the heads of everyone's favorite demanding moms. At a a TV Critics Association panel on Friday, Feb. 8, the cast and crew answered the biggest question of all: Will Big Little Lies return for Season 3?

According to Vulture, there is "no plan" for yet another season of the addicting TV show, with executive producer David E. Kelley telling the audience that "there is no such plan now," for more episodes. "We like our closure at the end of season two, so that will probably be it," he added. However, after Reese Witherspoon — who plays fan favorite Madeline Martha Mackenzie — pointed out that Kelley had previously noted that there were no plans for a second season, Nicole Kidman reiterated that the show will soon come to a tidy ending.

"There’s no plan," Kidman, who plays Celeste the newly-widowed ex wife of Alexander Skarsgard's Perry. "This was a long shoot for us and an enormous amount of work. I will say not to compare it to the first one because artistically it’s a wonderful thing and it is its own entity. It was made with an enormous amount of love."

In fact, Kidman also revealed during the TCA panel that the second season of Big Little Lies wasn't the result of a desire to tell more of the "Monterey Five's" story, but was actually because of the overwhelming response from fans. "We all said big good-byes, but we became very close and we had such a good time doing it and the desire to spend more time together was a huge part of it,” Kidman said.

She continued, "but also there was an enormous demand from the audience. I’ve never been in something that reached so far globally. That was such a compelling idea in terms of putting it together again. But it was very much generated by audiences."

Despite the desire for more episodes, Kelley noted that it took some time for the creative team of Big Little Lies to get on board, as they needed to come up with a compelling story to tell. "We didn’t want to do this unless we could at least have fair shot of living up to the bar of what we set in year one," he said, according to Vulture. "We didn’t finally agree to set sail until we had the commitment on bank from all of us that this was storyline that we were all passionate about."

One actor who is particularly excited about the new storyline is Zoe Kravitz, who told Rolling Stone in October that Season 2 will flesh out Bonnie's character in much greater detail. Explaining to the magazine that Bonnie wasn't fleshed out much beyond "sexy yoga teacher" and "second wife of someone important to a main character," in the first season, Kravitz noted "There’s more about her in the book, and I was a little bummed we weren’t going to get to explore that."

Still, the actress hinted that Bonnie would get a bigger arc in the upcoming Season 2, telling the magazine, "They’re not using her to tell someone else’s story. She has her own story."

She echoed those sentiments at the TCA Panel, with Vulture reporting that Kravitz hinted that Bonnie and Laura Dern's Renata will become part of the main group in the upcoming episodes. "The dynamic is really interesting this season because even though we are a group, we’re all going through so much," she explained. "So there’s still conflict within us, but we now have this thing that binds us together. So watching us all do this dance together, because of this lie, we all hold, is interesting."

Fans can find out exactly how that conflict affects the new group when Big Little Lies returns for Season 2 — with the new addition of Meryl Streep — in June. And, if we're really lucky, for yet another season after that.