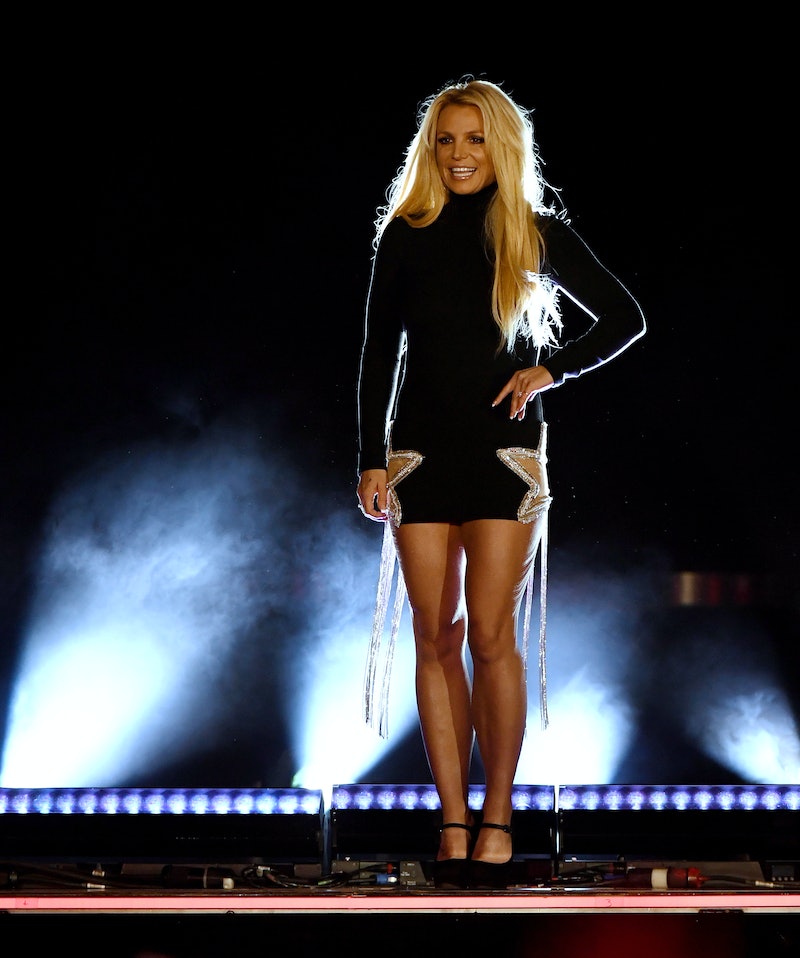 On the Sunday, Jan. 20 episode of Watch What Happens Live with Andy Cohen, Emmy winner and supermodel of the world RuPaul addressed a mystery that’s been floating around in the Ru-niverse for a little while now. When Andy Cohen asked if Britney Spears will be on RuPaul’s Drag Race Season 11, the host of the beloved reality competition series said, “I cannot deny nor confirm.” So no, that is not confirmation. But you know what it also isn't? A denial. Ru has left things as intriguing and wonderfully cryptic as possible, so let us grab a sponge and soak up this rumor. (Bustle reached out to VH1 for comment but has not heard back.)

This rumor started to gain quite a bit of momentum at the tail end of last year when TV Time shared a synopsis of the Season 11 premiere that just so happened to reference Miss American Dream Since She Was 17. Fans did some sleuthing and ultimately determined this synopsis probably was not real. Oh, and the synopsis has since been changed. At the time of writing, the TV Time synopsis is: “Style to 11! (S11E01) is the first episode of season eleven of 'RuPaul's Drag Race' airs on Fri Feb 22, 2019. RuPaul's Drag Race stars RuPaul Charles as RuPaul, Sasha Velour as Sasha Velour and Valentina as Valentina.”

Could this be the droid, er, Drag Race celebrity guest spoiler we're looking for? That's to be determined. As the Episode Calendar FAQ page notes, "Since the imported data is managed by people just like you or me, it’s very hard to keep it 100% updated all the time." The post also goes on to say that incorrect summaries are "usually corrected within a few days automatically."

Oh, but the plot gets thicker than the soles of the shoes Lady Gaga wore on Season 9. As a RuPaul’s Drag Race All Stars Season 4 viewing party, a fan asked co-host Ross Mathews to spill when Godney will finally appear on the reality program. Mathews paused and then said, “I don’t know anything about anything” as he smiled and walked away. Like Ru’s answer on WWHL, Mathews’s response is, to quote “Hold It Against Me,” a little haze-ay. And that's not nothing.

The Fans Have Been Clamoring For This

If Spears does indeed appear on the show, it'll be better late than never.

Ru's Response Is Not Being Taken Lightly

*Watches WWHL clip for the 70th time.* *Tries to find any other clues.*

It Really Would Be A Massive Episode

Whew, it would be one for the ages.

Understandably, Fans Are Extremely Here For It

"It" being the possibility of a Britney cameo, of course. Because, again, nothing's confirmed.

Regardless, We Must Prepare Ourselves

Because if a Britney cameo does indeed happen and we aren't prepared? Get ready to log roll right off that sofa.

Derrick Barry is an incredible Britney impersonator, and it would be a gift to all if the two shared the Drag Race stage for even a moment.

It Really Would Be A Night To Remember

Who else is sweating at the thought?

If This Happens, It'll Be The Best Anniversary Present Ever

The premiere date has not officially been announced, but Feb. 22 is the rumored day.

We fans are so excited, we're in too deep. Whoa-oh-oh. Britney on Drag Race would feel so right. Baby, thinking of this cameo keeps us up at night.