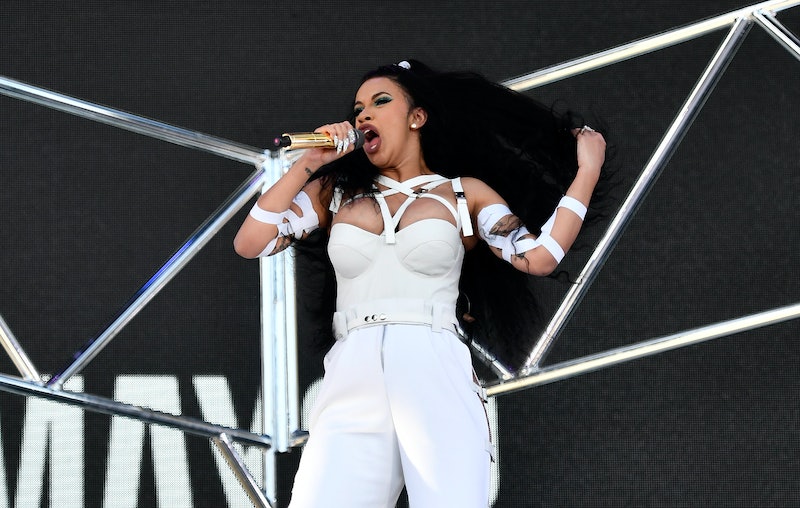 The 2018 Teen Choice Awards will celebrate the biggest names in pop culture on August 12. And, there’s probably not a bigger breakout artist than former reality TV star turned rapper Cardi B. She's been burning up the charts since she released “Bodak Yellow” in 2017, only to follow with her debut album, Invasion of Privacy, earlier this year. Per Billboard, the hilariously candid celebrity is nominated for several awards like Choice Summer Female Artist and obviously Choice R&B/Hip-Hop Artist. But will Cardi B be at the Teen Choice Awards to accept those honors? There’s no confirmation that she will appear because she's a busy mom, but anything is possible.

Cardi welcomed her first child, Kulture Kiari Cephus, with her husband Offset on July 10. Since then, she has been focused on the never-ending challenges of being a mom, which she talks about on her social media pages. Cardi B was set to go on tour this fall with Bruno Mars after appearing on the remix to his smash hit "Finesse," but she announced that she needs more time to recover from childbirth.

She posted a statement on Instagram and said she was not mentally or physically read to embark on such a strenuous journey. Cardi also wanted to follow doctor’s orders to keep her daughter healthy by not taking her on an extended road trip. It’s an understandable decision because the post-birth path to recovery while caring for an infant is super rough.

But, it looks like Cardi B has started leaving the nest for an occasional mommy break. She recently stepped out with blue tresses and an incredible Balenciaga outfit for a girl's night with Kim Kardashian and Kris Jenner. The KarJenners famously live in California, so that's likely where the girl's night went down, even though Cardi lives in Atlanta where Kulture was born. Is Cardi B back to jetsetting? Maybe.

Perhaps she's in the area for a while due to work, so she could always swing through the awards. Or, she might have just taken a quick trip out there to clear her head but she's back home with her baby. Either way, she's going to do what's best for her and her daughter.

There's no confirmation either way that Cardi will be at this year’s Teen Choice Awards, though she has already planned a couple of big shows later this year. Spin reports that Cardi will join Janet Jackson, The Weeknd, John Legend, and Janelle Monae for the Global Citizen Festival in New York City on September 29. She’s also headlining the Mala Luna Festival in San Antonio on October 27-78 alongside Nicky Jam and Tyler the Creator, per NME. It makes sense for Cardi to take on shorter gigs to get back in the game before she dives into a full-fledged tour, which means a night out at the TCA's isn't totally impossible.

Hopefully, Cardi will grab a few Teen Choice surfboards and maybe even record a hilarious acceptance speech. And, if she keeps cranking out big hits, she’s sure to have more nominations and chances to make an appearance at future shows.