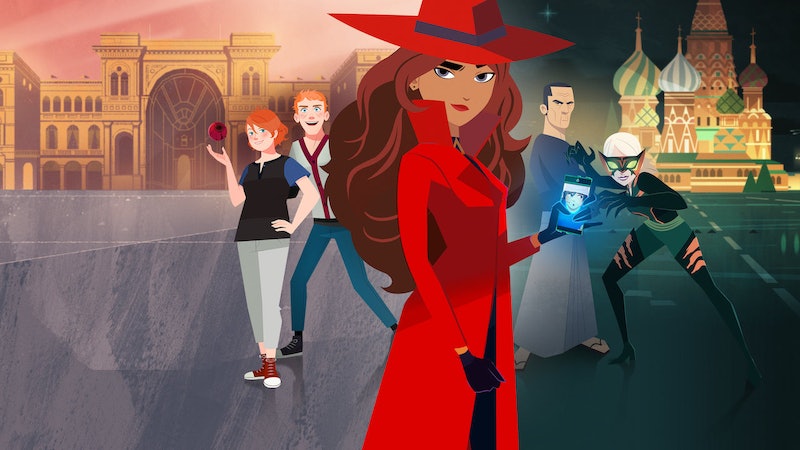 When Netflix green-lit Carmen Sandiego for Season 2 only a month after Season 1 premiered, it wasn't so much a renewal as it was a decision to release episodes that had already been made. According to The Wrap, Netflix picked up Carmen Sandiego with 20 episodes from the get-go. So considering Season 1 only contained nine, that means the streaming hub already had 11 episodes banked for Season 2. If Carmen Sandiego returns for Season 3, then, it may be a longer wait.

There was roughly a 21-month turnaround between Netflix's original 20-episode order in April 2017 and the January 2019 release of Season 1, so we should perhaps expect a similar timeframe this time around. That means Season 3, should the show get one, may not arrive until as late as summer 2021. It's possible that Netflix has already started production on a third season, but nothing has been announced.

There is, however, more Carmen Sandiego to look forward to regardless of if or when the show comes back. Gina Rodriguez, who voices Carmen in the animated series, is also slated to play the character in the upcoming live-action Carmen Sandiego movie. A release date for the film has not been announced yet, but it's possible that Netflix is waiting to unveil the movie before before making a decision about a third season of the show. And given how fast-paced and stunt-filled the film sounds, it's easy to see why the company's attention might be focused on completing it.

"The beautiful thing about Carmen is that she fences, and she jumps on gliders and freeBASEs mountains," Rodriguez told Vanity Fair about taking on the live-action role. "She's super dope, so I'm hoping that I get the opportunity to do all of those, to learn all of those, to go against my fear."

Rodriguez also seems to love playing Carmen so much that Netflix likely wouldn't have an issue securing her for future episodes of the animated series. As the actress told Glamour in a January interview, she was ecstatic to have been asked to take on a character she loved during her own childhood and bring the story to a whole new generation of kids.

"I said 1,000 percent yes [to Carmen]. I still can't believe it," Rodriguez recalled. "I've made a lot of projects geared toward older audiences, so to be able to play to this [younger] demographic where I was so inspired and motivated and encouraged to do what I love...those are transformative years."

So while it's unclear what the long-term plans are for the Carmen Sandiego show, we at least have 11 new episodes to look forward to when Season 2 arrives on Oct. 1, plus the live-action movie at some point, too. Thankfully, Netflix has a history of greenlighting future seasons of its original series quickly, sometimes before the previous one even airs, as it did with Ryan Murphy's newly released political satire The Politician. Hopefully it won't be long until we get some official news.

More like this
'Bridgerton' Newbie Hannah Dodd Has Thoughts On Colin and Penelope’s Love Story
By Bustle UK
Nicola Coughlan Just Revived 'Derry Girls' In The Most Unexpected Way
By El Hunt
Does 'Locke & Key’s Ending Mean There Could Be A Season 4?
By Sophia Moore
Here’s Everything Coming To & Leaving Netflix In August
By Jake Viswanath
Get Even More From Bustle — Sign Up For The Newsletter