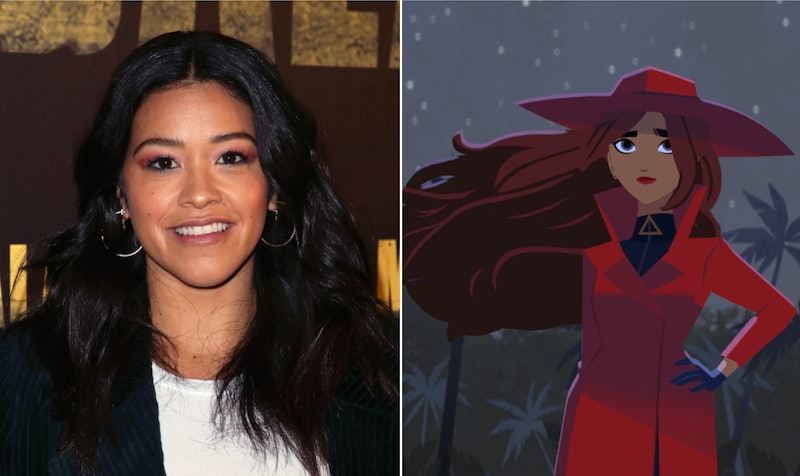 When it comes to Carmen Sandiego, we've been asking the wrong question. It's not where is she, but, who is she? In Netflix's Carmen Sandiego, out Jan. 18, the new Carmen Sandiego played by Gina Rodriguez is still rocking that scarlet trench and fedora, but she's no longer the queen of scams. Now, she's a real Robin Hood type who's out to stop V.I.L.E., the criminal organization she used to work for, from stealing the world's rarest treasures.

It's a timely reworking of a classic character thats allows her to finally get a chance to show who she really is. And according to Rodriguez, her version of Carmen is a true hero for our times, because she's armed not with superpowers, but something even better: empathy.

"We are definitely in need and in desire for characters like this," Rodriguez tells Bustle. "To see reflections of a strong, intelligent, fearless woman going after her dreams. But, at the same time traveling the world to create great empathy for us to see other cultures, other religions, other languages. To see that at the end of the day, we’re all human."

While the Carmen Sandiego of the '80s and '90s was a mysterious globetrotter voiced by Rita Moreno who kept everyone at arm's length, Rodriguez wanted her Carmen to be someone viewers could look up to. Especially those young viewers who don't often see themselves on TV.

To see her little brown skin on screen brought me to tears.

"It isn’t often that you get a Latina lead in an animation," Rodriguez points out, but, unfortunately, it isn't often that TV has Latina leads, period. According to last year's Boxed In study from San Diego State's Center for the Study of Women in Television and Film, Latinas represent just 7 percent of speaking roles on television, which was the highest percentage recorded in the study's 21-year history. "There’s a lot of joy and pride in that for sure," Rodriguez says of playing Carmen, "to see her little brown skin on screen brought me to tears."

Rodriguez wanted to make sure other communities felt seen, too, which is why Carmen Sandiego is filled with characters of all different cultures, ethnicities, and religions. "I hope that the reflection of my art shows that that’s the kind of world I want to live in," Rodriguez says of fighting for inclusive productions as an actor and a producer. "In a time where we’re all like, 'I’d love to see this!' It’s like, 'OK, here it is.' Carmen Sandiego is totally a projection of that."

By representing all different aspects of the world with its cast, which includes Stranger Things' Finn Wolfhard as Carmen's bestie, Player, she hopes the show will help expand viewers' worlds, too. But that's not the only thing she hopes fans will learn from the series. Rodriguez begins ticking off a long list of things she thinks Carmen can teach us.

"To be empathetic and tolerant and compassionate, and [to] open your ears and eyes to cultures and religions and change parts of yourself and grow as you learn about your privilege," Rodriguez says. "You learn about things you never had to go through and how can you be an ally. How you can contribute to other people’s voices and other people’s stories."

Run down that checklist again and you'll realize every quality on there — compassion, empathy, acceptance, allyship — also applies to Rodriguez's other show Jane The Virgin, which returns for its fifth and final season on March 27.

Since its 2014 debut, Jane The Virgin has worked to humanize the current immigration debate through Jane Villanueva and her family's fight to get Alba, Jane's abuela, citizenship. JtV's creator Jennie Urman Snyder has a knack for taking complex issues like immigration and making them feel personal, pushing for thoughtful conversations on everything from motherhood and grief to abortion and female ambition.

It won't be easy for Rodriguez to say goodbye to Jane, even if she has known for a season and a half that the upcoming one would be her last. But she's excited to see what happens to her. "We’re gonna go back to our roots, go back to our love triangle," Rodriguez says, adding that the premiere, which she directed, will pick up right where last season's shocking cliffhanger left off. Don't worry, no spoilers here.

After all these years, Rodriguez knows Jane inside and out, which was why it was fun for her to take on a new character in Carmen. And that might span beyond animation: Rodriguez says the Netflix live-action Carmen Sandiego movie is in its early stages. She can't share much about it yet, but she's willing to tease a little bit. "I’ve definitely tried on some fedoras, I’ve tried on some jackets," she says, before sharing photos of herself looking very Carmen-like.

When it comes to Carmen, Rodriguez wants her to continue working on becoming a better person, not a perfect person. "We can always evolve, we can always change, we can always learn from our mistakes," she says. "We have to be able to give space to say things have to change and then space for it to change."

That ability to change and learn is Carmen's greatest asset, in Rodriguez's opinion. "I love that she doesn’t have a superpower, her superpower is her smarts, her ability," Rodriguez says, comparing her to a superhero that she loved as a kid. "What I loved about Batman was that he had no powers, he just created it all himself, and she’s very similar in that respect." Except she's even better — she's Carmen Sandiego.