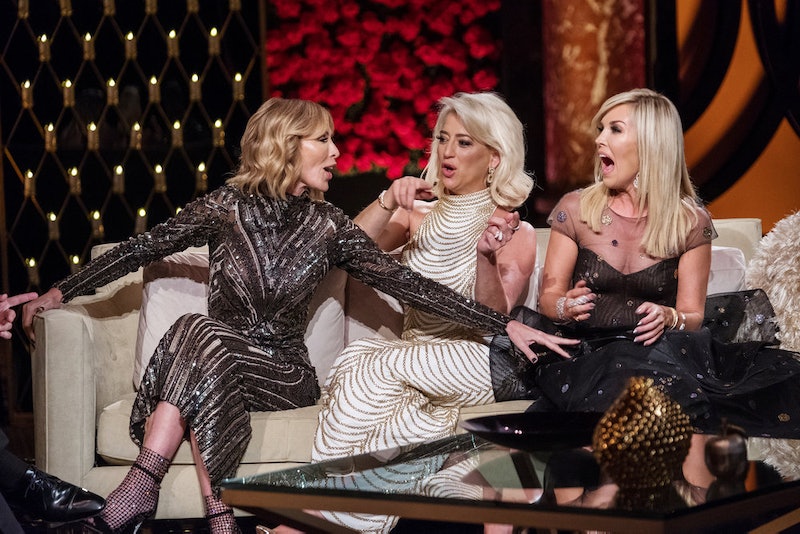 These days, the tenure for new Housewives seems to get shorter and shorter. You're either an OG Housewife, and you're there for ten years (see Teresa Giudice, Bethenny Frankel, Vicki Gunvalson, and Lisa Vanderpump), or you do a blip and then you're out. Carole Radziwill seemed like she was having a great time on Real Housewives Of New York and that she would fit into the former category, but the honeymoon is over. Actually, the whole thing is over. Will Carole be on Real Housewives Of New York Season 11? This New Yorker has called it quits to move on to bigger things.

Season 10 of Real Housewives Of New York was, uh, not the easiest to watch in terms of Carole and her disintegrating friend group. She and Bethenny used to be BFFs, but something (and honestly, at this point, it's hard to remember what) happened between them that made them near enemies. So much of the season was their infighting or arguing, and Carole played nice-ish to Bethenny's face while trashing her in confessional interviews. At the reunion, things got way worse, because it seemed like Carole had coordinated with some of the other Housewives to attack Bethenny and make her seem like a bad friend and a bad person.

It was obvious, and it was hard to watch, even for Real Housewives Of New York superfans. And also, Housewives fans have seen every trick in the book — printing out texts is so passé.

It was no surprise, then, that Carole announced right around reunion time that she wasn't coming back to the show. In a statement to Bravo, she spoke about her departure and threw some shade. She said:

"After six seasons on Bravo’s RHONYC, I have decided to return to what I do best — journalism and producing. I am sure this does not come as a surprise to any of the viewers, all of whom have been supportive, encouraging, and kind. My original curiosity about reality television has waned over the years and I am focusing on TV and writing projects that better suit my more steady temperament. I have worked with amazing producers, made great friends, and I’m thrilled to leave frenemies behind. I will remember this entire experience with delight, humor, and a veracious accuracy. Next."

So she wants to go back to her roots, which is fine, but she also doesn't like the women on the show? Or something? I mean, damn. You were coworkers for six years. If you don't have anything nice to say, don't say it at all. In February 2019, she was still shading Real Housewives Of New York, telling a fan that didn't know how she would view the show without Carole to watch "with the sound off."

Carole may have had enough of being a Housewife, but all of this makes her sound like a bit of a Bitter Betty. It's especially awkward because Carole and Bravo god Andy Cohen are good friends, so what does he think of all of these backhanded comments about the empire that he's built? Filling Carole's spot on the show is New York City businesswoman Barbara Kavovit, who seems excited to be on the show. Carole is heading back to her roots, a new Housewife is coming, and the seasons (of Bravo TV) will keep turning.