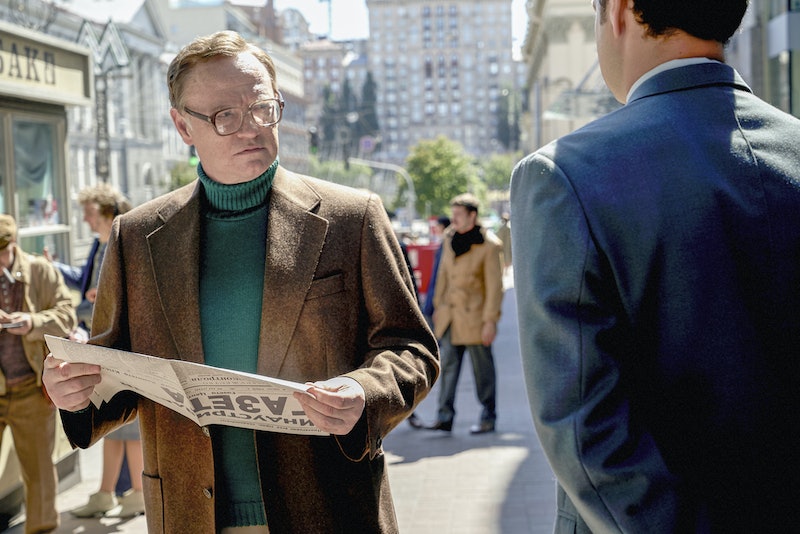 HBO's miniseries about the Chernobyl explosion is coming to an end after just five episodes. And as captivating as the series was in its examination of the disaster and its aftermath, Chernobyl won't return for another season — which may be for the best, given how grueling and difficult-to-watch some of the series' scenes can be. However, anyone looking to discover more about Chernobyl will be left with plenty of resources available to them to learn about the real people that inspired the main characters of Chernobyl and the long-reaching consequences of the explosion that were not covered in the series.

It seems as though the first moment of the series, Valery Legasov's (Jared Harris) recording an audio tape that places the blame for the horrors of Chernobyl on chief engineer Anatoly Dyatlov (Paul Ritter) before taking his own life may end up being the final moments of the show, chronologically. However, the effects of Chernobyl do not end with Legasov's death, and Russia is still dealing with the aftermath of the nuclear explosion today.

If you're looking for more information about Chernobyl told in the same thrilling and harrowing style of the HBO series, here are a few great places to start.

Midnight In Chernobyl by Adam Higginbotham

Voices from Chernobyl by Svetlana Alexievich

If you watched Chernobyl and found yourself more interested in the stories of everyday people affected by the explosion than the bureaucratic failings that surrounded the experience, then Voices from Chernobyl by Svetlana Alexievich could be of interest to you. Many of the most devastating sequences in Chernobyl, including Lyudmilla Ignatenko being forced to witness her husband succumb to radiation poisoning or the execution of the area's wildlife and housepets, are recollected in this book by the very people who lived through those experiences, providing a personal look at the horror of the Chernobyl explosion.

Manual for Survival: A Chernobyl Guide to the Future by Kate Brown

So what happens following the events of Chernobyl? Kate Brown's Manual for Survival: A Chernobyl Guide to the Future paints a picture of the government response to the disaster that suggests that the whitewashing of the effects of the explosion contributed to mismanagement during the 2011 Fukushima Nuclear Disaster. Manual for Survival picks up where the television series leaves off and shows how the consequences of the decisions made during the explosion still affect people today.

Chernobyl is a difficult watch, and books on the subject can be hard to read, but these texts are valuable resources to inspire people to make sure that the world never sees another Chernobyl or Fukushima as long as people are relying on nuclear power to live their lives.