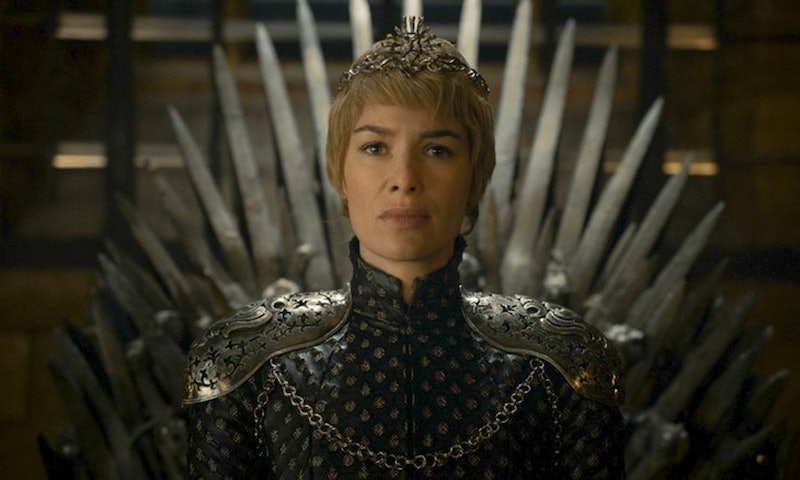 The series won't return until 2019, so to quench all your cravings in the meantime, here are the best Game of Thrones scenes from every season. There have been seven seasons of the hit HBO show so far, with the eighth premiering as soon as next April, and each is jam-packed with action. Not to mention strong female characters, jaw-dropping moments, and the casual killing-off of characters that fans have spent years getting to know.

As you might imagine, there are plenty of great moments to choose from. Some seasons and some moments are pretty straightforward as far as the standout moment, but others, not so much. For example, how is one supposed to choose between the embarrassment of riches that is Season 6? If you go with Cersei Lannister blowing up King's Landing, or King Tommen stepping calmly out of the window to his death, how do you sleep at night knowing that you passed over Hodor's gut-wrenching death in Episode 5? That, along with the reveal that his entire life had been leading up to giving Bran those extra few seconds to slip away, made the moment one of the series' most talked-about ever. Social media was imploding so hard over it that even years later, many fans would be hard-pressed to hear the phrase "Hold the door" without tearing up.

There will of course be some disagreement about the contents of this list, but there is no doubt that these are some of the best scenes from every season of Game of Thrones.

You never forget your first blindside, do you? Matching the book, the show set the tone early on for how serious they were about knocking out big important characters with Ned Stark's execution, a moment many viewers never saw coming. Anyone who hadn't read the books was lulled into complacency by a lot of character development for Ned, as played by Sean Bean, only to be separated from their naivety as cleanly as the Stark patriarch's head was separated from his body in Season 1, Episode 9, "Baelor." It would be a sign of many deaths to come.

Anyone who was wondering whether Melisandre was really as powerful as she said got their answer in Episode 5, "The Ghost of Harrenhal." That's when fans learned that the Red Woman could do a funky little trick where she gave birth to a shadow, which she sent off to assassinate Renly Baratheon, in service of helping his brother Stannis take the throne. This was also an early introduction of Brienne of Tarth into the storyline, which just adds to its importance.

Of course, the best moment from GoT Season 3 is the Red Wedding. It was never not gonna be the Red Wedding. The series already had a reputation for blood and gore, but with Season 3, Episode 9's "The Rains of Castamere," it was cemented. Because you can't kill off a character like Catelyn Stark, upend the War of the Five Kings, and break the law of guest right in one episode without earning a spot on this list. (Even if the episode also included one of the most gratuitous slayings of a pregnant woman that television has ever seen.)

Season 4 — The Mountain vs. The Viper

Any battle between someone nicknamed "The Mountain" and someone nicknamed "The Viper" is already worth a watch, but the stakes of "The Mountain and the Viper" (Season 4, Episode 8) couldn't have been much higher. The match-up was a trial by combat for Tyrion Lannister, accused of killing his nephew, Joffrey Baratheon, but it had roots even further back in history. Oberyn "The Viper" Martell was fighting on behalf of his sister, Elia and her children, whom Gregor "The Mountain" Clegane had murdered.

That was all the context set up before the match even began, which only intensified the heart-stopping roller coaster battle that resulted in the death of Oberyn and the disfiguring and near-death of The Mountain by poison.

The events of the Season 5 finale "Mother's Mercy" were one of the earliest instances in which the show overtook the books. So, for the first time, when Jon Snow was betrayed and stabbed to death by his own men, book-readers were just as much in the dark as show-watchers. That made the moment one of the most talked-about of the series, as fans argued over whether the Bastard of Winterfell really was dead. (Spoiler alert: he lived, and a lot of people figured that out, but it was still a huge moment.)

There are so many moments to choose from in Season 6, but ultimately you gotta go with Cersei Lannister blowing up King's Landing. Mostly because Hodor's death and backstory is still too raw to grapple with, and the Cersei moment proved so pivotal in so many other ways. The explosion caused the death of major characters like Margaery Tyrell, and led, tangentially, to the death of King Tommen by suicide; that haunting shot of him stepping out the window is likely seared into the brain of every fan forever.

But most of all, the shot of Cersei calmly sipping her tea on the balcony signals a huge shift for the character. With all of her children lost and the prophecy fulfilled, she's fully embracing her dark side. And sitting atop the Iron Throne, to boot.

Petyr Baelish had played a near perfect game for seven long seasons, and up until the Season 7 finale "The Dragon and the Wolf," there was no reason to assume his winning streak would stop there. He kept the trust of many whom he had betrayed, but he made a critical mistake in trying to pit sisters Arya and Sansa Stark against each other. After a speech delivered by Sansa perfectly designed to suggest that it was Arya who would be facing punishment, the error in judgement ultimately cost Littlefinger his life.

And there you have it! The seven best scenes from the seasons that have aired so far. Now all that's left is Season 8, which could contain any number of the series' best moments, all leading up to the worst moment — when this beloved series comes to a close. Luckily, reminiscing is forever, so the conversation and debate about which moment from each season of Game of Thrones tops the rest will truly never end.