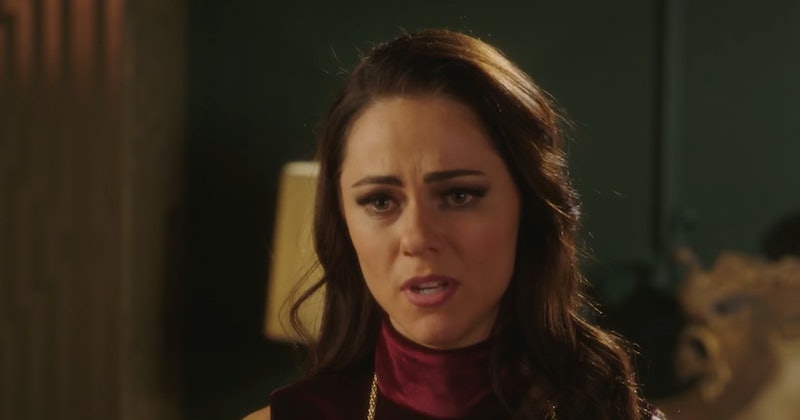 When things start out as wonderfully happy as they did during the Jan. 15 episode of The Royals, "More Than Kin, and Less Than Kind," you know something terrible is bound to happen. And that's exactly what occurred when Jasper broke up with Eleanor on The Royals during the Christmascentric episode. While I had been expecting this breakup to happen based on previews for Season 3, it didn't make it any easier to accept. So will Loyals' favorite dysfunctional couple of Eleanor and Jasper get back together in Season 3? The E! series has four more episodes to right this wrong.

With a show as dramatically juicy as The Royals, no one gets to be happy for an extended period of time — not even the beloved Princess Eleanor. So, when Eleanor started the episode so thrilled to be spending her favorite holiday with the man she loved that it inspired her to break out in song – literally, with The Royals' first-ever musical number! — it wasn't too shocking that the episode left her heartbroken. Still, it was not OK that Jasper pretended not to care about Eleanor when he ended things with her.

Earlier in the episode, Jasper was contacted by the reporter Harper who knew all about his shady American past. In order to protect Eleanor's public image, he decided he should just break up with her so that Harper wouldn't expose their relationship. However, couldn't he have just told her the truth rather than telling her he didn't mean the loving words he said and letters he wrote? Yes, she should have known he was lying, but her self-esteem is pretty damaged and since Eleanor has given him so many chances (too many, in fact), it will make it difficult for her to ever forgive him again.

Jasper's con artist dad was the one who gave Harper the information about his past, but I was initially suspicious of Robert since he had been questioning his sister's bodyguard boyfriend in the beginning of the episode. Robert was showing his dark side in the Jan. 15 episode, so perhaps he could make things right between Eleanor and Jasper by somehow exposing this reporter. Sure, it's a long shot, but I'm pretty desperate for Eleanor and Jasper to reunite before Season 3 is over.

If they do get back together in Season 3, I think fans will have to wait until the season finale for an epic reunion. Although that would be weeks away, Jeleanor fans know patience pays off — and it sure would be better than having to wait until Season 4.

More like this
Theo James Revealed The Truth About His 'White Lotus' Nude Scene & Fans Can't Cope
By Stephanie Topacio Long
The 'Kenan & Kel' Reunion On 'SNL' Took A Dramatic Turn, Thanks To Keke Palmer
By Brad Witter
Keke Palmer Just Announced She's "Going To Be A Mom" On 'SNL'
By Brad Witter
This 'White Lotus' Symbol Could Hint At A Major Character's Death
By Grace Wehniainen
Get Even More From Bustle — Sign Up For The Newsletter