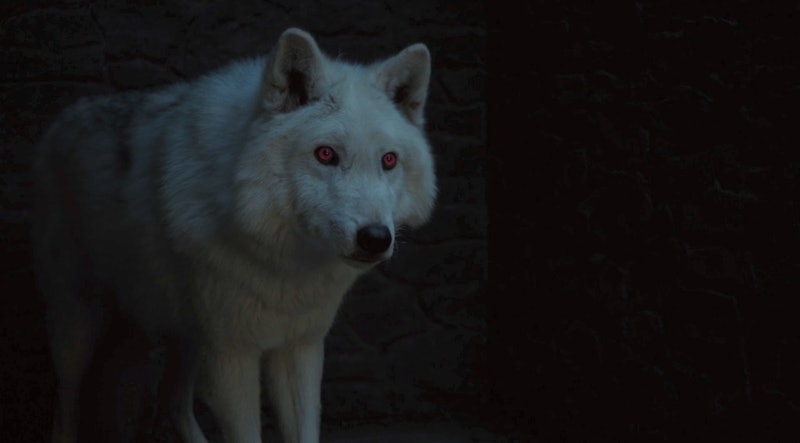 Just like many members of their human family, the Stark children direwolves haven't had much luck when it comes to surviving Game of Thrones. And as the most prominent of the direwolves, Ghost might die in Game of Thrones Season 8. Though he hadn't been onscreen since all the way back in Season 6, Episode 3, "Oathbreaker," Ghost made a subtle comeback in Season 8, Episode 2, "A Knight of the Seven Kingdoms," when Jon was hanging with Sam and Edd on the Winterfell battlements. It's probably no coincidence that Ghost showed up after a nearly 20-episode absence on the eve of the Battle of Winterfell. He's there for a reason.

As GoT fans know, all of the direwolves are connected to their human owners, but Ghost and Jon's bond has been one of the strongest over the years. Since Jon saved him, Ghost has been Jon's faithful companion. He was right by Jon's side when he was dead and then resurrected, and Ghost has even gone beyond the Wall with his human. So, of course, he'll be there at the Battle of Winterfell with Jon as well.

However, Ghost's appearance also feels foreboding considering that the next episode is expected to feature the high-casualty Battle of Winterfell. Ghost has been an expert at killing White Walkers since he protected Jon and Jeor Mormont during the Night's Watch wight attack back in Season 1. And based on what Game of Thrones visual effects supervisor Joe Bauer told HuffPost, Ghost will be back to his badass White Walker-fighting self. Bauer said Ghost will have a "fair amount of screen time in Season 8," adding that "He's very present and does some pretty cool things."

Since standing on the top of the battlements doesn't really qualify as "pretty cool things," Ghost's time to shine will most likely occur in the Battle of Winterfell. And doesn't it make sense that he'll do what he's always done best and protect Jon? But knowing the track record of the direwolves, their selflessness in protecting their owners, and the fact that this is the last season, that could very well mean that Ghost will die defending his human. So yeah, get ready to mourn Ghost like Ghost mourned Jon back in Season 6.

That being said, there's still a small possibility Ghost will survive. Apparently, the direwolf has been around — it's just that his scenes keep getting cut. According to Winter Is Coming, Game of Thrones writer Bryan Cogman said in the Blu-ray commentary of Season 7 that a Ghost and Jon moment was cut from "Stormborn," and the site noted Ghost was removed from a Season 6 moment, too. As Bauer told HuffPo in the aforementioned interview, working with real wolves to create the direwolf is "a bit limited," and the show has previously cut Ghost for time and budget reasons. Director Miguel Sapochnik told Business Insider that Ghost wasn't in the Battle of the Bastards due to those factors. "Ultimately we had to choose between Wun-Wun and the direwolf, so the dog bit the dust," Sapochnik said.

So, Ghost and Jon's reunion may not be as huge of a deal as it seems, which could bode well for the wolf's future. Whatever the case, it's clear Ghost's role this season was too important to cut, so expect big things to come.