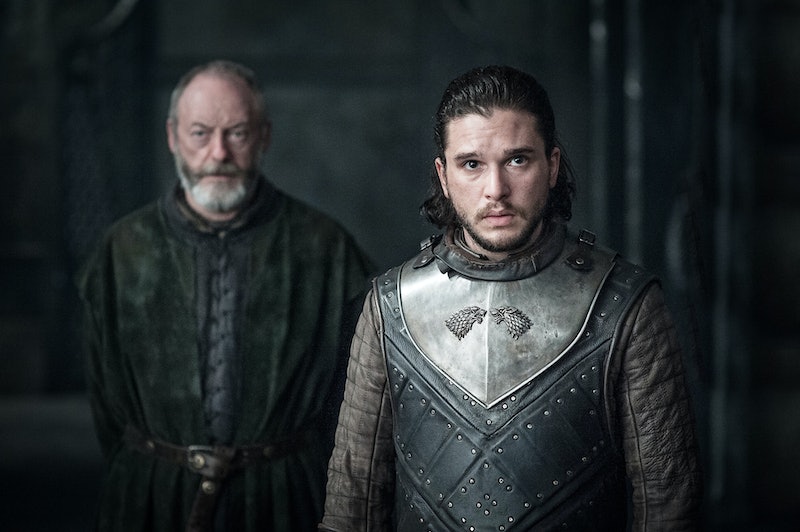 With the Battle of Winterfell upon us, Game of Thrones fans are prepared to say goodbye to a lot of fan-favorite characters. But while he might be the White Walkers' number one target after Bran, there are plenty of signs that Jon Snow survives the Battle of Winterfell. As the valiant military leader of the entire battle, he'll be in the thick of it. And when he's not killing wights or taking on White Walkers, he plans to face the Night King when — well, if — he comes for Bran. But even with all of this high-risk behavior, Jon Snow/Aegon Targaryen should live to see at least another episode or three on Game of Thrones.

Although Game of Thrones has killed a tremendous amount of characters, some characters seem to have nine lives. In the case of Beric Dondarrion, that's pretty literal. But as the only other known resurrected character, Jon is right behind him. And it's not just the fact that he has been resurrected or his uncanny ability to survive events that seem rather unsurvivable that make it appear like Jon will live past the Battle of Winterfell. His lineage is also fairly impossible — as Daenerys herself said when Jon finally confessed to her that he's the son of Rhaegar Targaryen and Lyanna Stark.

No one should be naive enough to believe with any sort of certainty that Jon Snow will make it out of Game of Thrones alive. But here are some signs that Aegon will go on beyond the Battle of Winterfell.

More like this
'Stranger Things' Fans Are Begging For Steve To Live For The Funniest Reasons
By Grace Wehniainen
'Stranger Things' Season 4 Volume 2 Trailer Teases New Episodes Coming July 1
By Grace Wehniainen and Gabrielle Bondi
The 'Ms. Marvel' Review Bombing Controversy, Explained
By Radhika Menon
Emilia Clarke Shares More Details About The New 'Game Of Thrones' Series
By Maxine Harrison
Get Even More From Bustle — Sign Up For The Newsletter