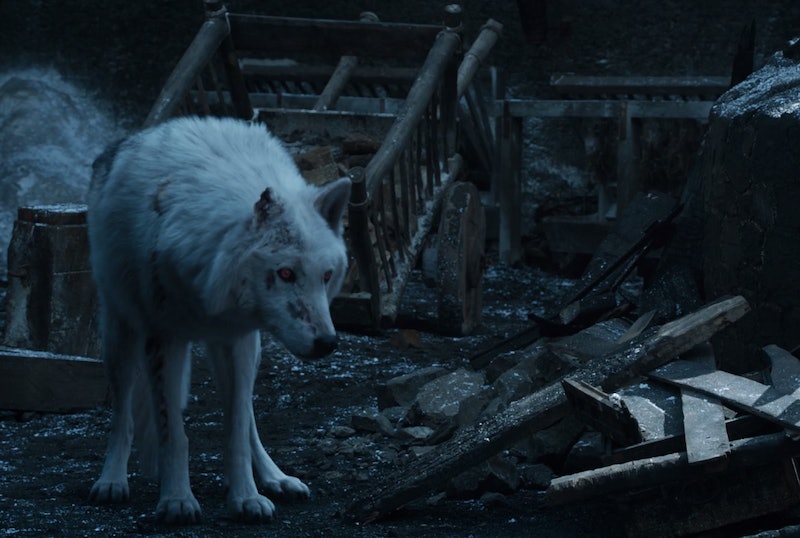 After Ghost, a certifiably very good boy, faithfully stood by his master's side for years (*stops typing to wipe away tears*), Jon unceremoniously gave him to Tormund at the end of the May 5 Game of Thrones episode, "The Last of the Starks." It was so unceremonious, in fact, that fans are hoping that the isn't the last we see of the direwolf before Season 8 is said and done. And although it's unclear whether Ghost will return in Game of Thrones, there's no question that audiences are upset with how their goodbye played out.

Sadly, the scene went like so: Tormund informed Jon that he and the rest of the Free Folk would be heading back north, because they didn't belong South of the Wall. The Warden of the North responded, "It's where he belongs, too," gesturing to Ghost. "A direwolf has no place in the South. Will you take him with you? He'll be happier up there." While it's good that Jon is dong what's best for his pet, he didn't even go over to pet him goodbye — instead managing a guilty look in his direction. Naturally, Ghost looked heartbroken, and fans were ready to riot over Jon's decision not to give his direwolf the dignity of a goodbye pet.

And although it seemed incredibly out of character for Jon, episode director David Nutter told HuffPo that Jon didn't interact with Ghost due to CGI constraints. "Since the direwolves are kind of CG creations, we felt it best to keep it as simple as possible," he told the site. "And I think that it played out much more powerfully that way." Nutter continued, saying, "Keeping Ghost off to the side, I thought that played out better.... Then [Jon] just walks off by himself, he turns to Ghost and has this moment with Ghost that I thought was very, very powerful."

However, it's clear that Game of Thrones fans didn't feel the same way, with many expressing that it looked incredibly heartless on Jon's part. As DoctorHolliday said in the Game of Thrones subreddit, "How is Jon not going to go even speak to Ghost before leaving, knowing he will never seen him again. Ghost literally just went to war for you and there is supposed to be a bond with direwolves, but Jon just peaces out with a nod."

Audiences first saw the sweet, white wolf back when he was just a puppy. In fact, it was Jon who suggested they keep the animals in the first place, if audiences will recall the scene from the Game of Thrones pilot. There were five dogs — Grey Wind, Lady, Nymeria, Summer, and Shaggydog — for the five Stark children — Robb, Sansa, Arya, Bran, and Rickon. "There are five pups — one for each of the Stark children," he told Ned Stark. "The direwolf is the sigil of your house. They were meant to have them."

Since Jon was a bastard at the time, he got to keep Ghost, who was the runt of the litter. Nevertheless, the direwolf and his master quickly bonded, just like his siblings became close with the five Stark children. And they went everywhere together, even when he joined the Night's Watch, went North of the Wall, and returned to Winterfell (though audiences rarely saw him).

So will Ghost come back? In some ways, it's nice to think of the sweet, gentle boy running around with Tormund North of the Wall. And doesn't the direwolf deserve a happy ending as much as any other Game of Thrones character? Besides, he and Nymeria are the only two direwolves left alive from their litter, so perhaps it's best for Ghost to quit while he's ahead.

That said, just because Jon has left to go to King's Landing doesn't meant we won't see Ghost in future episodes. So if there are any more scenes in Winterfell with the Free Folk, hopefully fans will get at least a glimpse of the sweet boy and make sure he's doing all right, even though his very best friend just abandoned him for some lady! That said, it's unclear how much time passed in Episode 4, and since Grey Worm, Tyrion, and Missandei had nearly reached King's Landing by ship, that may indicate that several months have passed since the Battle of Winterfell.

But whatever the case, hopefully Ghost will survive Game of Thrones Season 8, because he's the show's real MVP. As as the last episode proved, Ygritte was right about one thing: Jon Snow truly knows nothing — especially when it comes to taking care of your direwolf.