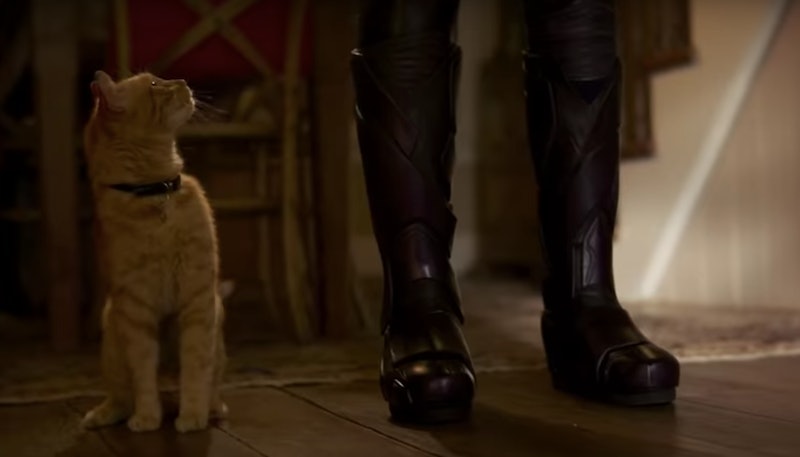 Out of all of the exciting events that unfold in Captain Marvel, perhaps the one that has captivated fans the most is the introduction of Goose. The adorable orange cat takes a liking to Nick Fury (Samuel L. Jackson) and Carol Danvers (Brie Larson), and is revealed to be so much more than just a cuddly sidekick. Spoilers ahead. Goose is actually an alien being called a Flerken, and she plays a huge role in the climactic battle against the Kree. So is Goose going to be in Avengers: Endgame? This Flerken has a lot more potential to impact the MCU.

Goose is arguably linked to the next MCU movie, which comes out on Apr. 26, in the Captain Marvel post-credits scene, when she coughs up the Tesseract that she swallowed earlier in the film. But there's more evidence than that. Marvel Studios president Kevin Feige hinted that Goose will likely make a return to the big screen soon. In an interview with Slash Film, Feige answered a question with a question: "You and other people are asking, 'When do we see more of the cat?' The question is 'how long — what is the lifespan of a Flerken?'"

Feige continued, "A Flerken might be longer lived [than a cat]. And as we know from the comics, Flerken procreate quite a bit. I don’t want to say Tribble-esque, but there’s sort of points in those comics where they sort of are [like Tribbles] in terms of how many appear. So I’m sure there are more Flerken out there. And is Goose out there? She could be." A "could be" is about as affirming an answer as you can hope to get from one of the of- inscrutable Marvel masterminds.

Fans certainly want to see Goose again, and the alien creature might just play an integral role in the Avengers' pursuit to undo Thanos' dusting, which took place at the end of Infinity War. The fact that Goose could swallow the Tesseract — the glowing blue cube which holds the Space Stone — might end up proving invaluable should the Avengers attempt to go back in time to retrieve the Infinity Stone.

The Avengers might collect the Space Stone by traveling to the past to retrieve the Tesseract from the cat's magical cavernous vessel of a mouth, but perhaps Goose could prove helpful in another way in Endgame. As many sources have pointed out, the Marvel comics reveal that Flerkens' mouths, in addition to producing giant flesh-eating tentacles when faced with danger, can hold alternate dimensions. Even though the cat's mouth-dimensions are just a post-credits trick in Captain Marvel, the movie's writers were certainly aware of Goose's comic book abilities. While talking with the Empire Podcast earlier this week, one of the co-writer/director of Captain Marvel, Ryan Fleck, addressed Goose. "A cat, who's a Flerken, who has pocket dimensions?" he said. "There was no way that wasn't going to end up in this movie!"

Goose doesn't appear in the Endgame trailer, but that alone doesn't mean much. Keep your eyes peeled for the Flerken or her kin in Marvel's next ensemble blockbuster.