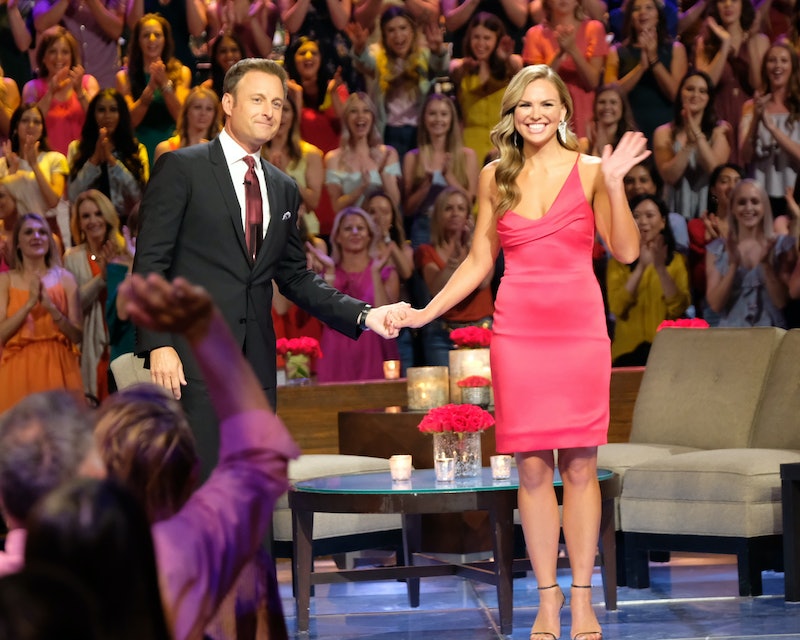 It's kind of Bachelor In Paradise tradition for a Bachelor or Bachelorette to visit Mexico and give some sage words of advice about dating to the tipsy, sun-drunk contestants on the beach. Becca did it for Colton and Tia, most recently, but it's always been tradition for the coupled up Bachelor Nation alum to show up now and again. But a clip of Hannah B. arriving in Bachelor In Paradise at the end of the premiere episode's super tease has some fans seriously shook — is she really going to head to Mexico as a single and try to date? Since her Bachelorette ending wasn't traditional in any way, it wouldn't be that out of the blue for her to try her hand in Paradise. But it would be kind of unprecedented.

While it's very, very common for contestants of certain seasons to head directly to Paradise after the spring Bachelorette season, usually the finalists take it slow. Take Blake, for example. Last season, he was fresh off of a relationship with Becca and still getting his head together while Paradise was filming, as he explained to Chris Harrison when he arrived for Season 6. Colton, you will recall, did show up on the beach last year and had a brief, painful stint with Tia before becoming the Bachelor himself. So it happens. But finalists are one thing — it's wholly new that a Bachelorette would saunter onto the Paradise set just days after her After the Final Rose taping (which is when it would have to be, given the filming schedules of these shows). But Hannah B. is not like other women and given that she was asking Tyler C. out on a date just after her finale aired, literally anything is possible.

Again, it is very common for the current year's Bachelor or Bachelorette to show up and offer some words of advice to their friends or former flames. But given Hannah's current relationship status and that one clip from the season's trailer, fans seem to be fairly certain that the Alabama-native is going to shoot her shot on Bachelor in Paradise.

It would be wonderful to watch, depending on which dude catches her eye down there, but it has to be said that there are no official reports about Hannah B. being cast on Paradise this season. Still, that hasn't stopped fans from losing their collective mind.

It's actually a kind of tricky situation to figure out. Hannah's season wrapped in May and she was with Jed for some foreseeable time afterward. Bachelor in Paradise began filming around the end of June, as per PopSugar, and usually wraps within a month. Which means that if Hannah went to Paradise, it was likely when she was still with Jed, meaning that there won't be anything juicy going on with her down there. Or, depending on how quickly her and Jed's breakup went down in real life (and not on TV schedules), she spent a day or so down there post-Jed and just before the live 2019 Bachelorette finale. See? It's tricky.

But not impossible for her to have spent some quality time with the Season 6 BiP cast on the beach. It's just highly unlikely that she falls in love or gets engaged down there. But that doesn't mean it won't be fun to see what she says and does hanging out with Wells by the bar.