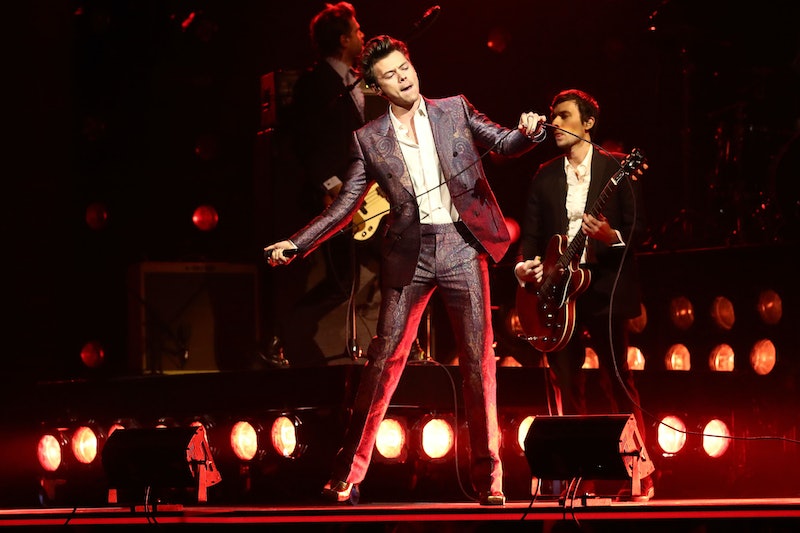 Harry Styles. Gaaaaah stop throwing bras at me! I only said his name for goodness sake. Yes, this curly haired crooner drives fans cray. For those who just can't get enough of the former One Direction member and current hit solo artist, the big question is, will Harry Styles tour the UK in 2019?

Sadly, according to Styles' official website, nothing is scheduled to happen in 2019, tour-wise anyway. Bustle reached out to his rep too to see if there's any news. This may be super disappointing to fans, however in fairness to the hard working gent, he just finished a huge tour back in mid July. And when I say huge? I mean like, bonkers huge. As in all over the world, as in 80 dates. Wow and I whine if I don't get a day off for ten days. Well, at least I guess he can afford a nice holiday after that.

Styles has proven himself to be quite the songsmith, performer, and fashion icon since his career kicked off back when a young, spring-heeled Styles auditioned for The X Factor in 2010.

Wow, he owes a lot to that audition and let's be honest, those curls. Yes, his intention always was to be a solo artist, so him being put with the other members of One Direction as a sort of super group, was a happy coincidence. One that set dollar signs shining wide in the eyes of Simon Cowell. And did they win? No, they came second. So maybe first is the worst and second is the best. The band went on to have global success and seemingly become BFFs. Back in 2015, the boys broke the hearts of countless fans and took what they said was a "hiatus" from the band. Ever since, speculation has been rife as to whether this hiatus is going to be forever or just a break. Speaking to Chelsea Handler in an interview for Another Man, he spoke on the band's future:

"I don't know. When we started, people always asked, 'Where do you think you'll be in five years?' It's a difficult question to answer. I would never say we'll never do anything again but it's good for us to be exploring different things... Maybe at some point everyone will want to do something again but it's better if it happens naturally like, 'Hey we all really want to do this again.' If that were to happen it would be amazing. I would never rule that out."

So with that, Styles really has embarked on an already super impressive solo career, recording and releasing his self titled first solo album, Harry Styles, which despite mixed reviews has done really well and even debuted at number one. Nothing to sniff at now is it?

Styles has recently gone up even higher in fans' estimations, proving himself to be a true ally and supporter of the #MeToo movement by donating a large sum of money to the charity. Wow, not only a complete super star, but now also a good role model and philanthropist.

No confirmation on whether Styles is set to release a new album in the near future, however he did actually perform two new songs on his tour, The Independent report, so like, that looks like a maybe? Well, here's hoping.