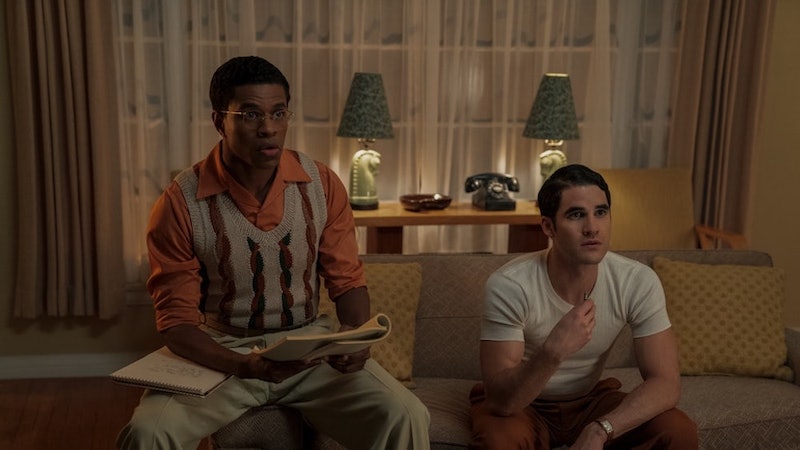 Ryan Murphy's new Netflix drama, Hollywood, may be billed as a limited series, but there's already been discussion about what the show might look like if it returns for Season 2. As with many Murphy projects, it would likely be an anthology, jumping ahead to "the late 1960s, with many of the same actors in entirely new roles," according to The Hollywood Reporter.

No other details have been revealed about the long-term plans for the show (Netflix hasn't even officially renewed it), but you’d be hard pressed to find a Ryan Murphy series that hasn't been picked up for more than one season: American Horror Story, Nip/Tuck, Pose, even the critically reviled 9-1-1. Murphy also has a a five-year deal with Netflix, so if he sees a way to continue the story, a second season will likely materialize. And there's a lot to dig into in late '60s Hollywood.

As reported by The New York Times, the era is often referred to as "New Hollywood," and ushered in a wave of new, young filmmakers who upended the old studio system. Hollywood's first season already envisions a version of the '40s in which diverse, inclusive stories were being made decades before they were in reality; moving 20 years forward would be a whole new ball game.

But even if Hollywood doesn't return, Murphy is simply happy he got to rewrite the stories of the real-life figures who fascinated him as a child. "When I was a kid, I was obsessed with three people and they were Rock Hudson and Anna May Wong and Hattie McDaniel," he told Collider in a recent interview. "And I never really understood why I think until I was older. I think I just saw a lot of sadness in them. They weren't able to be who they wanted to be and express who they wanted to express. And they were really a sad part of Hollywood history and a cautionary tale."

Murphy's version, on the other hand, is anything but sad.