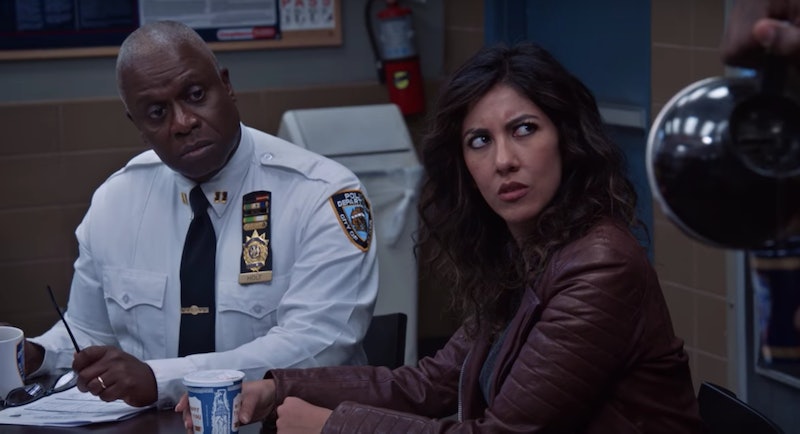 You don't have to be a detective to figure out that this news is a major bummer. On Thursday, May 10, TVLine reported that Fox has cancelled Brooklyn Nine-Nine after five seasons. But is this really the end of the line for the series? Will Netflix or Hulu pick up Brooklyn Nine-Nine and save the day in a big way? There's no word on whether or not it'll be renewed by one of the streaming services, but fans are clinging to this morsel of hope.

As tough a pill as this awful news is to swallow, Brooklyn Nine-Nine's cancellation did not come out of left field; unfortunately, the writing has been on the wall for little while. As TVLine pointed out back in March, the series' current season was getting approximately 1.7 million viewers a week, whereas a lot of the episodes in the earlier seasons raked in at least twice that amount. According to Entertainment Weekly, this average is the sitcom's lowest audience count ever.

Though the ratings are down, lots of people are still watching. They apparently just aren't watching it the old fashioned way. When TV Guide asked series co-creator Dan Goor about the possibility of cancellation back in December 2017, he said,

"Fox has been very supportive and encouraging of us and continues to be so, and their official statement to us is they don't look at that kind of ratings data and I hope to god that is true. But also, our show does very well in the Live+7 setting, and we're one of the most-watched live-action shows on Hulu. I think that is of interest to Fox. But the truth is, in this era of television, it's tough, especially with our live ratings. I think there are a lot of families with kids who watch our show, and unfortunately at 9:30, that means they're often watching it in a time-shifted way because kids aren't staying up that late. I'm sure Fox has all that data and I'm sure we look great when you consider that."

Oof, this one sure stings.

Brooklyn Nine-Nine follows several members of Brooklyn's 99th precinct as they solve crimes, deal with wonderfully petty office drama (detectives: they’re just like us), fall in love, and develop strong bonds with one another. It is as funny as it is charming, as moving as it is goofy, and as clever as it is heartfelt. And hey, what else would you expect from series co-creators Goor and Michael Schur, or the outstanding cast, for that matter? Starring Andy Samberg, Andre Braugher, Melissa Fumero, Terry Crews, Stephanie Beatriz, Joe Lo Truglio, Chelsea Peretti, Dirk Blocker, and Joel McKinnon Miller, this sitcom boasts one of the best ensembles currently on the small screen.

The award-winning series is a precious gem, and the TV landscape will be worse off without it. Fans are grieving the loss of this show, but they are not ready to give up. Not yet. Not when there are streaming services that have a habit of picking up shows that've been dropped by networks.