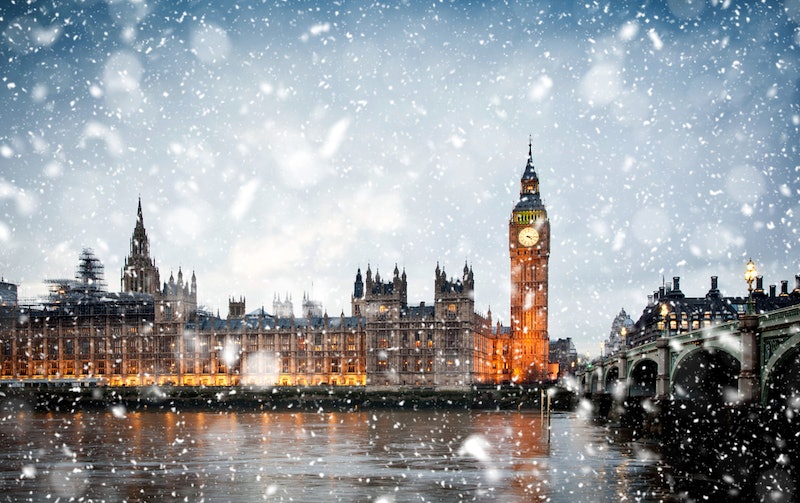 Each year as the festive season approaches, many of us dream of a white Christmas. However, the hopes that a fresh blanket of glorious snow will add to the joyful atmosphere of Christmas are usually dashed, But what about this year? Will 2018 be a white Christmas in the UK?

As reported by The Sun, the Met Office stated that it's not possible to accurately predict any potential snowfall until around five days before the big day, but that hasn't stopped people taking bets on this year's chances. And according to Skybet, the bookmakers are currently offering odds of 2/1 of a white Christmas in Glasgow, 5/2 in Belfast, and odds of 3/1 in both London and Cardiff. In order to be considered an official white Christmas, at least one snowflake must hit the ground anywhere in the UK on December 25. Any snow that has fallen previously in the month of December, and remains on the ground until Christmas Day, will not be counted.

Bookmaker Coral have also slashed the odds of winter 2018-2019 being the coldest one since records began. According to The Week, these freezing weather predictions are based on reports that El Nino, a warm weather system that is caused by rising water temperatures in the central and east-central Equatorial Pacific, may trigger ice storms in the Northern Hemisphere this December.

A spokesperson for Coral said of the chances of a record-breaking winter, "We might be enjoying some autumn sunshine now but all the signs are pointing towards a bleak winter, with weeks of snow forecast for the Christmas months", and continued "Our odds suggest there’s a real chance of this winter entering the record books as the coldest."

The last white Christmas in the UK came in 2010, when snow was recorded on the ground at 83 percent of the nation's weather stations, and snow or sleet fell at 19 percent of stations, reports the Met Office. This did not include the south of England, however, an area which hasn't enjoyed snowfall on Christmas Day since 2004. Snowflakes have fallen on Christmas 38 times in the past 55 years, which according to The Sun, means that you can statistically expect to see a white Christmas around once every two years.

Some weather forecasters state that the UK is more likely to see snow in the three months following Christmas. The Week reports that on average, snow or sleet falls on 5.3 days in January, 5.6 days in February, and 4.2 days in March — compared with just 3.9 days in the month of December. Sadly, the beautiful white blanket scenes many hope for are much rarer nowadays. The Met Office told The Week: "White Christmases were more frequent in the 18th and 19th centuries, even more so before the change of calendar in 1752 which effectively pushed Christmas day back by 12 days."

So those rooting for a wintery landscape to enjoy this year will just have to wait and see, but hopefully the predicted freezing temperatures will increase the chances of a white Christmas in 2018. Fingers crossed.