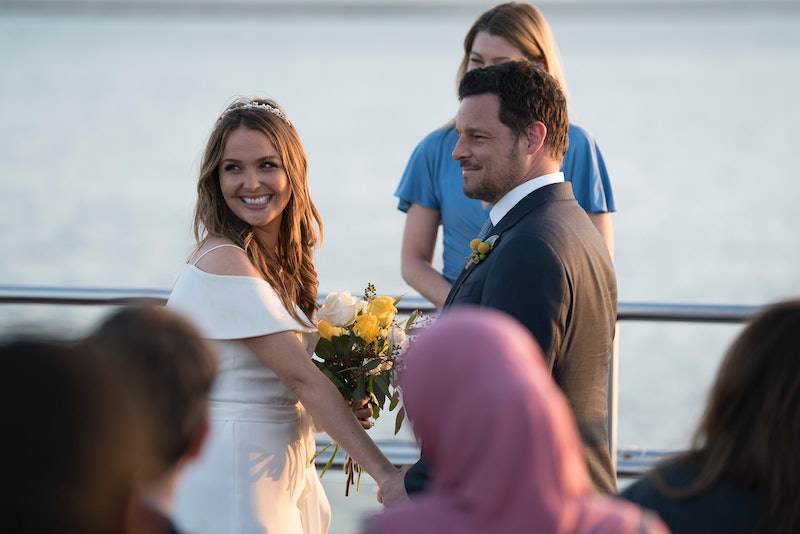 Now that Alex and Jo Karev are officially married on Grey's Anatomy, they might be thinking of taking another step and starting a family. next step. At the beginning of Grey's, it would have been hard to think of Alex Karev as a dad, but now, all these seasons later, it's clear that Alex (and Jo) will definitely be great parents. And they might be starting their family sooner than viewers would think.

Back in Season 12, Episode 3, Jo and Alex talked about having kids because Jo was sensitive to the fact that Alex had embryos frozen with Izzie, his ex-wife. She got over these feelings when Alex explained they only froze those embryos because Izzie had cancer and they weren't really planning for babies. Then, in Season 15, Episode 16 of Grey's Anatomy, Jo and Alex talked about the possibility of passing on Alex's "crazy" (as he called it) family genes to their children. Alex's family has a history of mental illness, and at that point, Jo didn't know what her family history was, because she was placed up for adoption early in her life and grew up in foster care.

Despite the fact that Jo and Alex were talking about the issues that could arise should they have kids, one thing comes through loud and clear — they both definitely want to have children.

When Alex and Jo were getting married in Season 16's "Whistlin' Past the Graveyard," she blurted out during their vows that she was expecting... but then she said it was a joke with “scared you! I got you so bad!" All kidding aside, right now might not be the best time for Alex and Jo to start having babies. Alex just got a job as the head of Pac North, a Seattle hospital that, well, let's just say lacks the cutting-edge technology and extremely skilled staff that made Grey Sloan such an amazing place to work. Alex has a lot on his hands there. Additionally, Jo has been working on her own projects at Grey Sloan and Bailey just named her attending general surgeon. No one can ever be 100% ready to have a child, but since Alex and Jo both lead such busy lives, they'll have to figure out when having a baby would suit them best.

That said, Camilla Luddington, who plays Jo, is so ready for these two to make a mess of cute kids. "I just honestly want them to have something they have to take care of that's not just a plant that they killed," she joked to Bustle in October 2019. For now, Alex and Jo are just Alex and Jo, but it's only a matter of time before the world has more little Karevs running about.

More like this
Ellen Pompeo & Patrick Dempsey Just Showed Why They Should Team Up Again
By Brad Witter
Kaley Cuoco Was Set Up With Her New Boyfriend Tom Pelphrey By Her Manager
By Hugh McIntyre and Jake Viswanath
'House of The Dragon' Episode 6 Will Take Place A Decade After Episode 5
By Kadin Burnett
The ‘Emily In Paris’ Season 3 Release Date Is Here, Plus The First Footage
By Bustle Staff
Get Even More From Bustle — Sign Up For The Newsletter