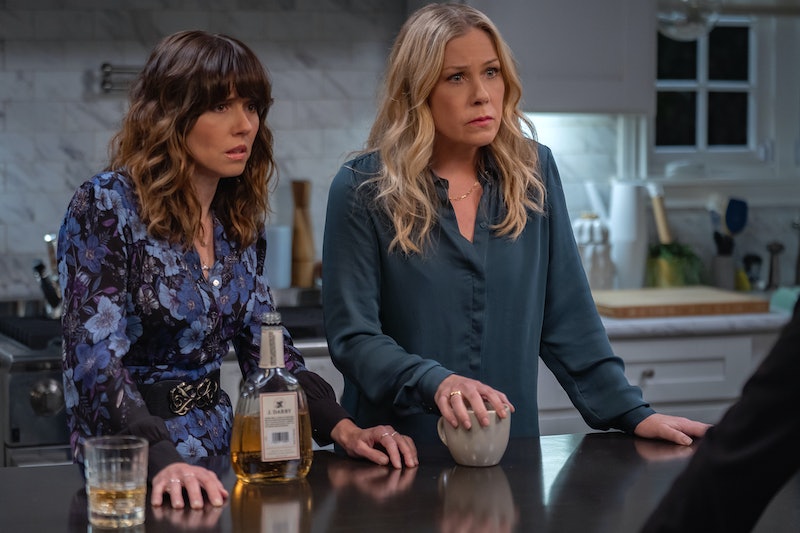 Spoilers ahead for Dead to Me Season 2. Some secrets — and dead bodies, for that matter — never stay buried for long. Thanks to a hiker's dog digging up Steve's remains at the end of Dead to Me Season 2, it seems like Jen and Judy could get caught even after Detective Perez let them off the hook. But as series creator and executive producer Liz Feldman points out to Bustle, viewers are only assuming investigators have recovered and identified Steve's body in the woods. "It definitely seems that way, but things are never as they seem on this show," she teases.

That's not to say the women are in the clear if Dead to Me returns for Season 3. "Jen and Judy have made some truly terrible choices, and you can't run from the consequences of those choices forever," Feldman explains.

There's also the matter of the cliffhanger hit-and-run that gave Steve's twin brother Ben his own secret to bear. "Obviously we see an empty bottle in the car and you can only assume that he's the one who emptied it," she says. "I think some of his demons have maybe caught up with him. He's an incredibly nice guy, but everybody has a dark side."

That's certainly the case with most of the show's main characters. But whatever happens moving forward, Feldman says that Jen and Judy each genuinely want to grow and become more self-actualized — just don't expect any overnight transformations. "We are who we are," she says. "People don't just change that drastically."

Whether or not Dead to Me becomes a prison comedy in a potential third season, the series will, as always, continue to center around Jen and Judy's unlikely, enduring friendship. As Feldman sums up: "I believe in their bond as two women who can mutually support each other. I want to see that friendship expand and grow, and that's what I plan to do."