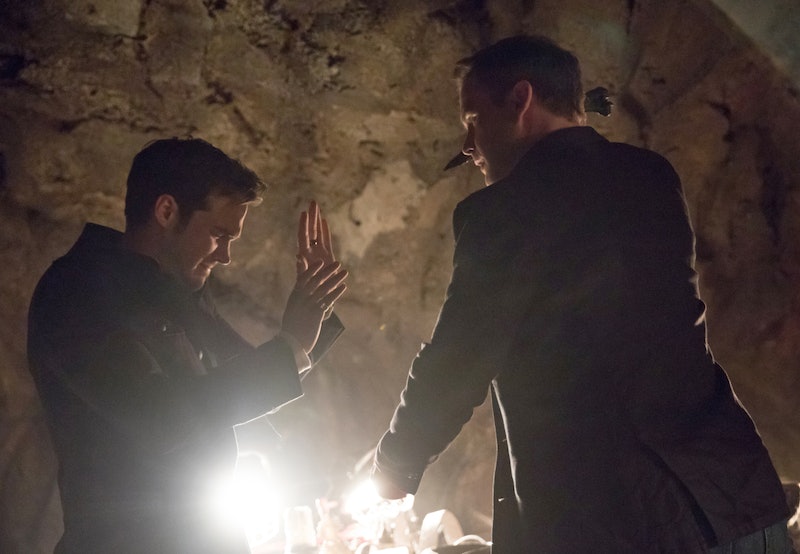 Kai is officially back in Mystic Falls (or, at least, Mystic Falls-adjacent). The Vampire Diaries' "What Are You?" ended with Kai's return, which can only mean one thing: there's trouble ahead. Kai sauntered back onto TVD as if nothing had happened, walking calmly into a cave underneath the Armory where Damon and Alaric were discussing the possibility of killing Cade. The last time we saw Kai, he was being decapitated by Damon after placing a curse on Elena that would keep her in a sleep state until Bonnie's death, thus delaying Damon's happy ending. Now that he's back, will Kai bring Elena back on The Vampire Diaries?

Kai's mystical return raises a lot of questions. Not the least of which is, how the hell is he back from the dead? As far as Elena is concerned, it's quite possible that Kai will somehow put an end to the curse, especially considering Nina Dobrev has officially confirmed her return to the show for the series finale. But something tells me Kai won't do that unless Damon is willing to do something for him. Let's just hope that whatever it is Kai wants, it has nothing to do with Alaric's magical twins (because we all know how that ended the first time).

The fact that Kai made his grand entrance just as Damon and Alaric were looking at a device that could kill Cade makes me think Kai was either brought back by the devil himself, or sent back with some kind of magic mission to kill Cade as redemption. Kai might also have been brought back by Bonnie's burst of magic when Enzo died, which, according to her mother, opened a door to hell. However Kai came back, you can bet Damon isn't going to let him go without waking up Elena.

Delena fans, this could be the moment you've been waiting for!