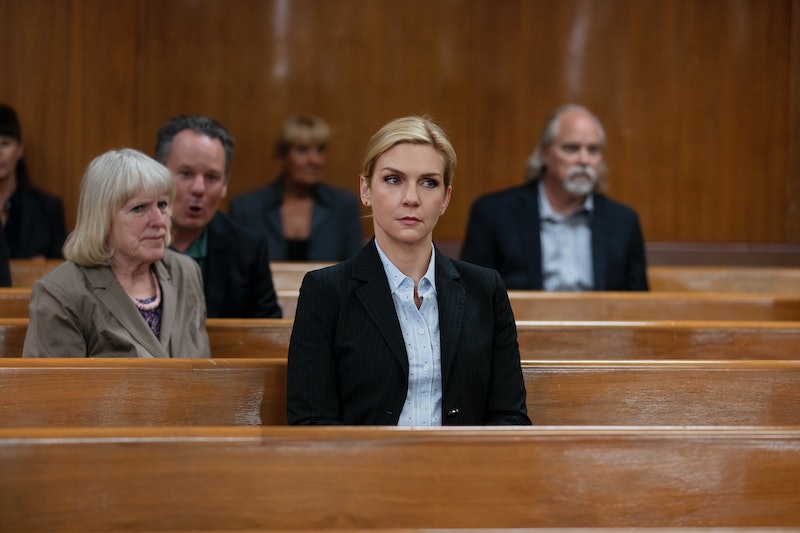 Spoilers ahead for Better Call Saul Season 5. Kim and Jimmy's relationship feels like it will be one of the biggest tragedies of Better Call Saul. But as Jimmy continues to embody Saul in the courtroom, Kim is embracing her partner's new lawyer persona. With Kim recruiting Saul to go against Mesa Verde, "Namaste" makes the case that Jimmy and Kim could be together in Breaking Bad. There was no mention of Rhea Seehorn's Kim Wexler in the original series and Saul certainly seemed single in Breaking Bad. But maybe there's a chance Saul was just a professional at keeping his private life really private.

Kim wasn't overly impressed that Jimmy McGill decided to practice law as Saul Goodman after she helped him earn his license back. In the fourth episode of Season 5, Kim witnessed Jimmy's highly unethical trick in the courtroom of hiring someone to play his defendant for the case to be ruled a mistrial. Rather than be annoyed or angry, this act led Kim to ask Jimmy to represent Mr. Acker in a case against Mesa Verde. While Kim has done several scams with Jimmy, this decision to use his power of persuasion against her powerful client makes it seem she might be on board with his transition to Saul Goodman.

By having Jimmy to represent Mr. Acker, Kim is asking him to pull out all of Saul's dirty tricks against her. During their face-off, Saul's actions could ruin her reputation with Mesa Verde and Schweikart & Cokely. To bring down Mesa Verde, Kim is making a game of her own career, so she's not really the moral compass fans had thought her to be.

Kim's fate in Breaking Bad is something that no one involved in Better Call Saul will reveal. Seehorn consistently claims the writers haven't told her where Kim is during the events of Breaking Bad with her telling the Los Angeles Times in February, "They tell me nothing. All I ever have is the script in front of me." Yet, she has faith in how the writers will finish Kim's story, adding, "It will be the perfect ending for her, whatever it is."

It seemed like Kim would pull away from Jimmy as he became Saul, but Season 5 is making that theory less likely. If they don't break up, there is a chance Kim could be dead by Breaking Bad. Since Saul is being forced to represent some deadly members of the drug cartel, the Salamancas could hurt Kim to get to Jimmy. (She also doesn't know he's working for the drug cartel, so she could draw a line there.) But maybe, just maybe, Kim is secretly Saul's partner during the events of Breaking Bad.

In an interview with Vulture, Breaking Bad and Better Call Saul creator Vince Gilligan noted that Kim seems to be following Jimmy's dark path. "The inherent drama lies in the fact that she's not making him better so much as he's unlocking things in her that potentially make her worse," he said. Gilligan added that Kim is engaging in more "self-destructive behavior" and warned, "If you're worried about Kim Wexler, your fears are only going to get compounded as you watch Season 5."

Currently, Kim is the person who will clean up the mess she makes, like when she swept up the glass from the beer bottles she had broken. Yet, Gilligan is insinuating Kim's moral fiber will unravel this season. But one major silver lining to the decline of her ethics is that by the time Breaking Bad rolls along, Saul and Kim could still be living in lawyerly sin together.

More like this
'Breaking Bad' Duo Walt & Jesse Are Back — In This Super Bowl Commercial
By Jake Viswanath
Who Is Allison Williams Dating After Her Divorce? She’s Engaged With A Child
By Jake Viswanath
Everything To Know About A Potential 'Lockwood & Co.' Season 2
By Gretchen Smail
Shonda Rhimes Responded To The Surprise Exit Of A Day 1 'Grey's Anatomy' Figure
By Grace Wehniainen
Get Even More From Bustle — Sign Up For The Newsletter
From hair trends to relationship advice, our daily newsletter has everything you need to sound like a person who’s on TikTok, even if you aren’t.