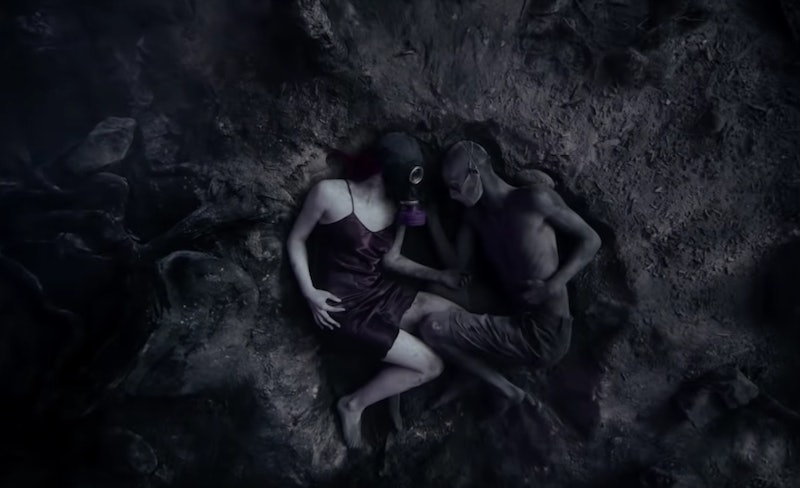 Um. Wow. What is the — what exactly — but, like, how does the... yikes. Right? On August 6, FX dropped a teaser for American Horror Story: Apocalypse, and if you thought you had had a lot questions about the upcoming eighth season before, just wait until you watch this totally creepy 45-second clip. There is a lot to unpack, and very little information to go on.

Fans of Ryan Murphy's horror anthology series first started getting hints about Apocalypse back in January, when Murphy announced that the plot would be "topical," but set in the future. In April, Murphy clarified that "the future" meant "18 months from today" — so, September 2019 — and in June, he teased that it would involve some sort of Murder House/Coven cross-over. Yes, it's all very mysterious and very confusing.

Things have been made even more mysterious and confusing, though, now that the teaser for Apocalypse has officially dropped. Fair warning: It's probably going to make your skin crawl. Maybe don't watch it before you go to bed?

Perhaps it's best to start with a quick run-down of the imagery seen in the clip, so at least you'll know what you're in for. First, there's a fetus, whose umbilical cord slithers through the center of an hourglass to reveal that it's attached to a black, beating heart.

This image — of the fetus in the hour glass supplying blood through its umbilical cord to a black, beating heart — could very well be in reference to Season 1, aka Murder House, and little baby Michael aka the Anti-Christ. Maybe the teaser is telling fans that time is running out (the hourglass) before the end of the world ("apocalypse"), and it will happen at the hands of baby Michael (the Anti-Christ)?

Then, the black, beating heart then bursts into flames, and seemingly drops onto the earth, exploding like some sort of atomic bomb. Underneath the rubble, there's a woman in a purple slip with a gas mask on, who appears to have survived. The person laying next to her, however, does not look quite as lucky. It's worth noting that Connie Britton's character, Vivian Ward, who gave birth to baby Michael, wore an awful lot of purple before she supposedly died in Murder House — curious.

After that, there's a skull, a red onion that, when sliced open, spills out a bunch of creepy-crawlers and two battling scorpions (one black, the other white), birds flying through an iron-wrought window that transforms into the symbol for "anarchy," and an unattached hand that pulls the anarchy symbol into what looks like a crematorium. Like I said, there's a lot to unpack.

As the shot zooms out, we're presented with the hour glass one final time. The glass is flipped over and the countdown, it seems, has begun.

As for the Coven connection, well, it's complicated. There are a lot of the clues fans have noticed throughout the series that primarily boil down to family ties and purported ancestral abilities.

Now, if you've been following AHS throughout the last seven seasons, you already know that almost every season is connected — not just Murder House and Coven — through various characters and references. Depending on how invested in those connections you are, the cross-over theories are certainly worth revisiting before Apocalypse drops on September 12. Either way, though, if the teaser is any indication, it's going to be very, very scary.