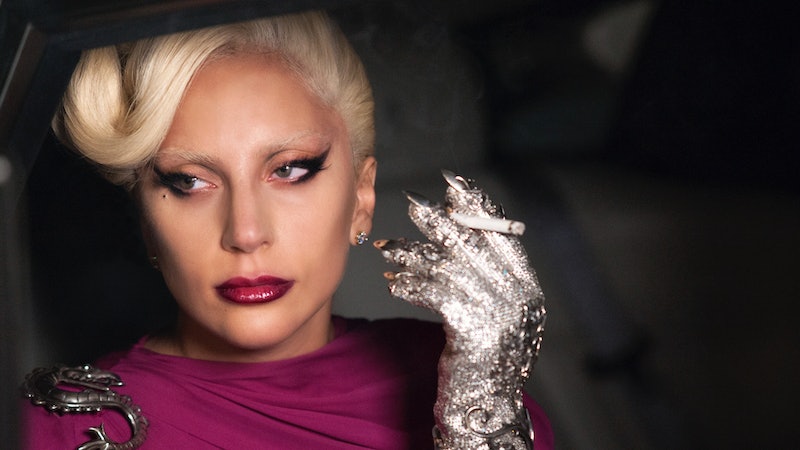 Back in 2015, pop icon Lady Gaga shook the American Horror Story universe when she made her debut in the fifth series of the hit show. Gaga played the character of Elizabeth "The Countess" Johnson in AHS: Hotel, and received high praise for her performance in the anthology series, winning her first ever Golden Globe. The following year, the superstar returned to AHS in a recurring role, but Gaga hasn't been seen in the series since. In fairness, the "Poker Face" singer has been keeping herself super busy recently, but will Lady Gaga ever return to American Horror Story?

As it stands, there has been no announcement with regards to the star's grand return to AHS. Bustle have reached out to Gaga's reps for comment on the matter, and will update with any new information once it becomes available. Despite not giving much away in terms of casting, Ryan Murphy, the man behind the Emmy-award winning series, did reveal some details about future seasons of the show. Speaking to Entertainment Tonight, Murphy said "the witches will be back. Not next season, though. But we have something really fun planned."

Gaga's American Horror Story return is indeed possible, and viewers of the FX series have witnessed many actors reprise various roles throughout the eight seasons. Although if the singer's current schedule gives us any indication, I probably wouldn't count on her AHS comeback anytime soon. Last month, Gaga received an array of nominations for her performance in A Star Is Born, and picked up her second Golden Globe after winning the trophy for Best Original Song. As Billboard reports, the critically-acclaimed actress is now also nominated for multiple awards at the 2019 Oscars, in the Best Actress and Best Song categories.

Upon the exciting news, Gaga took to Twitter to thank the academy for her two nominations. In a statement, she said "I am so humbled and proud to be nominated for two Academy Awards. There really is no greater honor, and to share this excitement with Bradley, Sam, Mark, Andrew, Anthony and everyone involved in the film is pretty mind blowing. Bradley had such a precise vision and perspective, and he created a true family. The greatest gift has been how the film has resonated with so many different types of people on so many levels. It's really unbelievable. I'm still in shock. This is a dream come true, that a once very little girl could never believe would be happening. Thank you so much to the academy for recognising our hard work and passion for art."

The "Shallow" singer is also hoping to bring home the gold at the 2019 BAFTA and Grammy Awards, both of which take place this weekend. And according to Entertainment Weekly, the 32-year-old will be performing at the 2019 Grammy Awards — which marks the fifth year in a row Gaga has performed during the live ceremony. Although I hope Gaga does eventually make her way back to American Horror Story, I'm more than happy to watch her strut her stuff on the big screen. Yas queen.