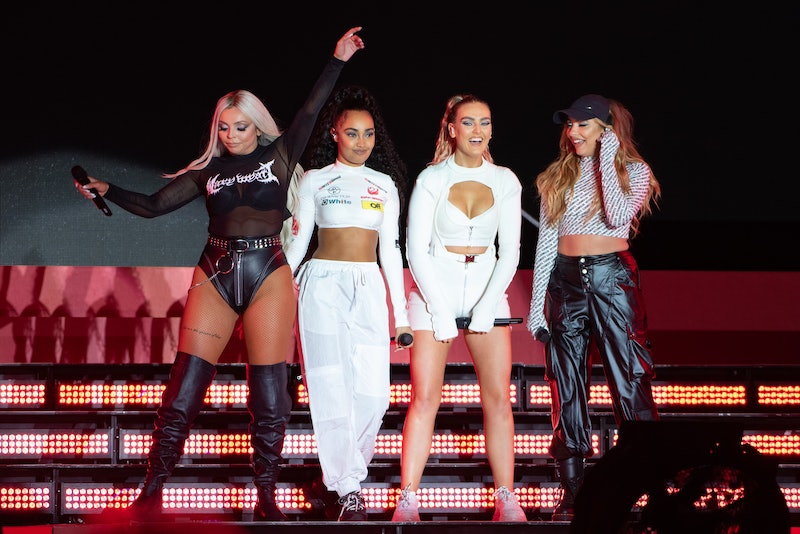 'Tis the season for musicians to announce massive summer tours, and the hype to see Little Mix live is real. The group already have a sixth album in the works, so it's understandable to wonder will Little Mix tour in 2020? Well, clear your morning plans for this Thursday, because Little Mix are planning a 21-date tour throughout the UK in June and July 2020.

As detailed in a press statement sent to Bustle, the band will perform 21 dates across the country starting in Falkirk on June 26 and concluding in Aberdeen on July 26. Tickets go on sale this Thursday (Nov. 28) at 9 p.m., and will be available via Ticketmaster. At least 75p for the proceeds from tickets "will be donated to Nordoff Robins — a charity that uses the power of music therapy to enrich the lives of people affected by life-limiting illness, isolation or disability," with the exception of Little Mix's Hyde Park slot.

"Performing live is our favourite thing to do as a band, we love it," Little Mix said in the statement. "Our last summer tour in 2018 was one of our favourites ever, so we can't wait for some more brilliant outdoor shows next year. We want everyone to come party with us in the sunshine!"

The 2018 tour was one of their biggest yet, with dates across the world with a five-date run at the O2 Arena in London. That was in support of their fifth album LM5, so this next tour could suggest that their sixth record is due sometime in early 2020.

Especially since they'll be heading to the studio next week, as The Sun reports. "We go back into the studio next week to start writing our next album so we can't wait to do that," Jade Thirwall said. Fans have already had a little taster of what that album may contain thanks to the release of 'Bounce Back' in June.