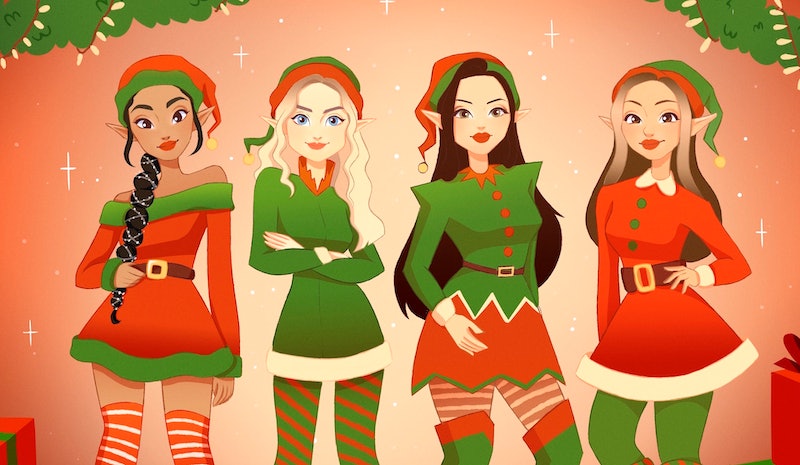 Christmas is the most special time of year for music fans as they await to see who will be crowned with the number one hit. And the UK's favourite girl band Little Mix have released a Christmas song hot on the heels of other artists hoping to grab the mantle this year.

Stop the Christmas lights and drop what you're doing, this is not a drill. The news dropped just in time for you to learn every single dang lyric — and dare I suggest a dance routine — with your nearest and dearest?

According to a statement sent to Bustle UK, the song, "One I've Been Missing," is written by the band's own Leigh-Anne Pinnock alongside Tre Jean-Marie, Jez Ashurst, Sinead Harnett, and Rachel Furner.

The song has been released alongside a snazzy lyric video, meaning we have yet to see the actual video. But judging from the high end production quality of the group's previous music videos like Power, Women Like Me, and Bounce Back, we're likely to be in for a real treat.

"We absolutely love Christmas, it's our favourite time of the year. We've always wanted to write and release a Christmas song, we were just waiting for the right moment! The minute I finished writing 'One I've Been Missing' I couldn't wait to play it to the other three girls."

So the question is, who else is in the running for this year's Christmas number one? According to the Official Charts website there are multiple contenders this year.

Stormzy is one of the biggest contenders with his song "Own It," which is a track off his hotly anticipated second album. Lewis Capaldi's heartbreaking "Before You Go" is getting a heck of a lot of love and Robbie Williams and Tyson Fury on "Bad Sharon" is kind of the ultimate British Christmas song in that it celebrates the most important feeling at this time of year: regret after an office Christmas party.

In recent year, anthems heard on Christmas adverts have also found a place in the running. This year it looks like it'll be the Dan Smith's cover of REO Speedwagon's "Can't Fight This Feeling," which accompanied Excitable Edgar's twirl on this year's John Lewis advert.

Although it remains to be seen how Little Mix's new tune will do in the charts, one thing that's for sure is it's a solid banger and will be making you feel as Christmassy as can be.