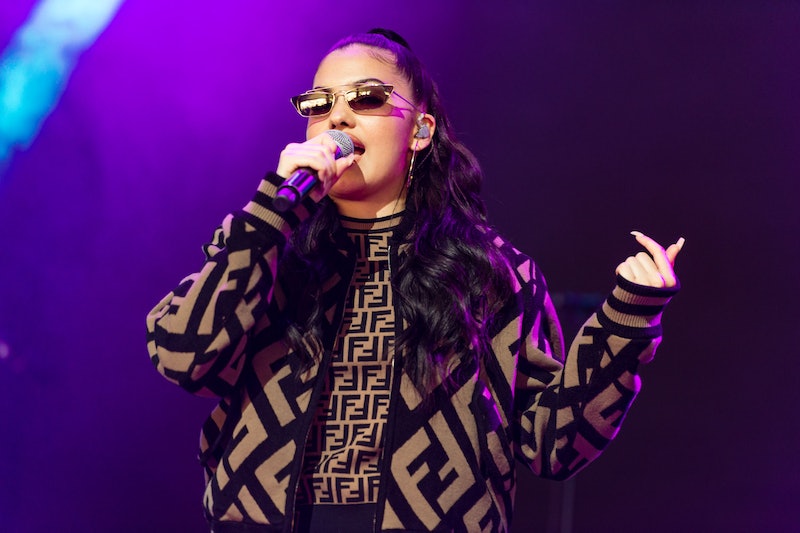 Following the release of her debut album High Expectations earlier in the year, singer-songwriter Mabel went on to spawn two UK top ten singles, all of which followed her nomination for British Breakthrough Act of 2019 at the 39th annual BRIT Awards. Following her recent success, Mabel has accumulated an ever-expanding fanbase, many of whom might be wondering when they'll get a chance to see the singer live on tour. So, will Mabel be touring the UK in 2020?

Well, fans of the British-Swedish singer are in luck, because Mabel will be embarking on a UK tour in 2020. Yay. According to her official website, the UK leg of the singer's Hugh Expectations Tour will kick off on Thursday, Jan. 30 in Belfast, before continuing onto other major UK cities including Leeds, Liverpool, Nottingham, Glasgow, and Manchester — before concluding in London's Eventim Apollo on Wednesday, Feb. 12, 2020.

Tickets for Mabel's High Expectations Tour are currently available to purchase via the singer's official website.

As NME reports, the "Don't Call Me Up" hitmaker was set to perform several UK shows back in August, as part of her previous Mad Love Tour. However, Mabel was forced to postpone the string of shows due to illness, and the dates have now been rescheduled to take place throughout the month of November 2019 in Newcastle, Bristol, London and Liverpool. In a statement shared on Facebook, the singer said she was "gutted" she wasn't able to perform the original lineup of shows, and revealed that her doctor "advised against" going ahead with the planned performances. Mabel then went on to reassure her loyal fans, and confirmed that the Mad Love Tour would "still be happening" in November. Phew.

Those familiar with the BRIT Award-nominee will be more than aware of Mabel's impressive musical history, having being brought up by singer Neneh Cherry and famed producer Cameron McVey. Interestingly, the "God Is A Dancer" singer is also the goddaughter of R.E.M frontman Michael Stipe, so it's easy to assume where Mabel's passion for the industry first emerged. Speaking to NME about her music heritage, the singer revealed that despite being keen to form her own career path, she is not "embarrassed" by her parents success, and added her work is "very separate from what my parents do."

So, if you'd like to enjoy the rising star live, you can bag tickets to the Mad Love Tour and High Expectation Tour on Mabel's official website — and you can also catch Mabel on The Jonathan Ross Show on Saturday, Nov. 9, at 10 p.m. on ITV1.

More like this
Theo James Would “Love” To Star In George Michael Biopic
By Sam Ramsden
Yes, 'The Price Of Glee' Is Available To Watch In The UK
By Catharina Cheung
This 'Emily In Paris' x Blackpink Crossover Is Beyond Iconic
By El Hunt
The Spice Girls Are Set To Reunite At King Charles III’s Coronation
By Sam Ramsden
Get The Very Best Of Bustle/UK
Sign up for Bustle UK's twice-weekly newsletter, featuring the latest must-watch TV, moving personal stories, and expert advice on the hottest viral buys.

This article was originally published on November 8, 2019