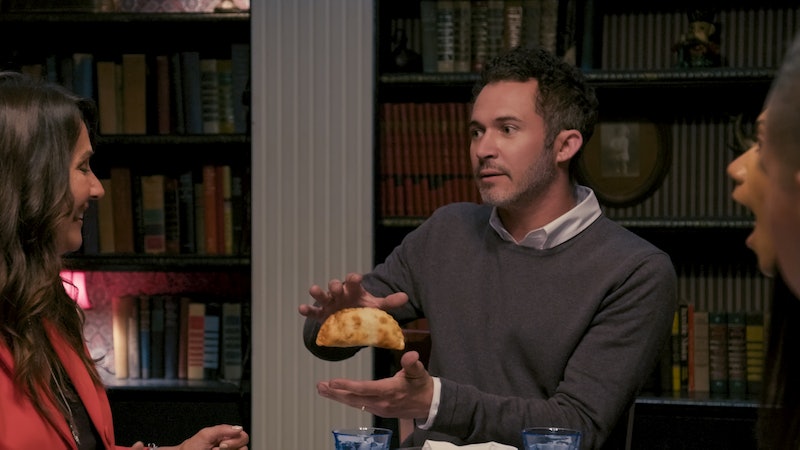 "I can't even process what you just did," a stunned subject tells Magic for Humans host Justin Willman in Season 3. This time around, the fearless magician performs tricks in the buff, on rollerblades, and on an airplane — and that's just in the trailer. If Magic for Humans returns for Season 4, he'll really have to up the ante.

Alas, Netflix has yet to announce whether they plan to renew or cancel the show. It's also difficult to tell when Magic for Humans might come back even if it's greenlit. Season 1 premiered in August 2018, Season 2 debuted over a year after that, in December 2019, and Season 3 is dropping just five months later. There doesn't seem to be any sort of set schedule for the series, and the fact that all film and TV productions have been shut down amid the COVID-19 pandemic only further skews the timeline.

Fortunately, Willman is taking advantage of this downtime by performing tricks for his son, Jackson, who often responds by inspecting the props and accidentally revealing his secrets. In one Instagram video, the Magic for Humans star cuts a piece of rope, then sets the scissors on Jackson's high chair. Naturally, the 1-year-old picks up the scissors before his dad can stop him. "[Jackson is] at an age where everything is magic to him — he's a funny straight man," Willman told the Chicago Tribune. "I've discovered he has a pretty amazing comic timing, busting me on my tricks."

If you want to try out some of his tricks at home, Willman has also created something called the "Social Distancing Magician Starter Kit," which is perfect for children (and adults) to practice their sleight of hand. All proceeds DirectRelief.org and EndAlz.org for go to COVID-19 relief.

"I always wanted to make a magic kit and put it out there," Willman told the Tribune. "This was my chance. I've got time now, so I said, 'Let's create that magic kit.' We're all stuck in our homes feeling helpless."

And while it seems like the celebrity magician wants to keep making his TV show after the quarantines have lifted, he also can't wait to go back on tour. "I'm eager to get back out," he said. "The TV show is a passion, but the goal is to create new fans to entertain in packed theaters. I feel I'll come back better than ever with even more gusto."