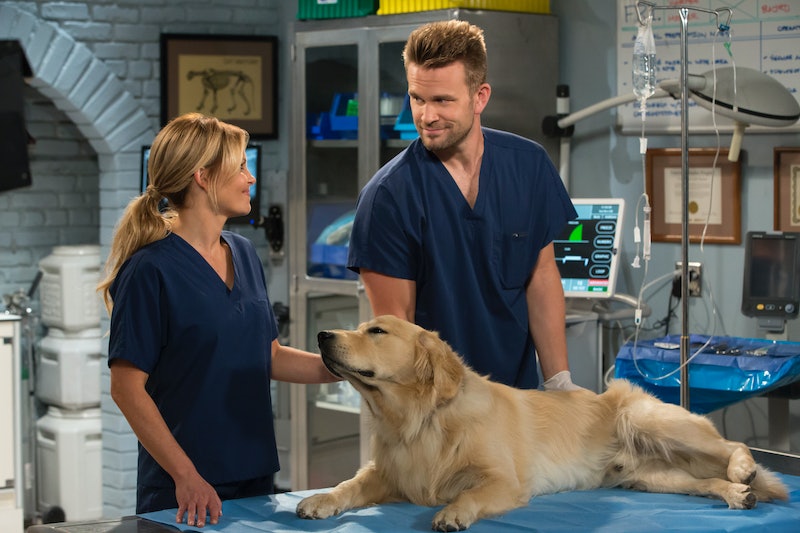 The love triangle between D.J., Steve, and Matt may be over on Fuller House, but that doesn't mean fans have seen the last of veterinarian Matt Harmon. Although he didn't appear in much of the second half of Season 3, Matt will be in Fuller House Season 4 when it premieres on Dec. 14. After accepting his marriage proposal in Japan, D.J. ended things with Matt to be with Steve. Matt understandably took a break from Harmon-Fuller Pet Care after the breakup, but once you're a part of the Tanner gang, you're in it for life. So D.J.'s ex-fiancé and coworker will be back and getting cozy with someone unexpected in Fuller House Season 4.

John Brotherton portrays Matt and he has posted about his involvement in Season 4 on his Instagram account. You can also spot Matt in the Fuller House Season 4 trailer. And while he isn't with D.J. anymore, it makes sense that he's around since he still technically co-owns Harmon-Fuller Pet Care with her. Plus, even though they were romantic rivals for D.J's affections, Matt and Steve became best buds. From what cast members have posted on Instagram, it doesn't seem that Matt will be in a ton of episodes. But according to the Instagram of Fuller House writer and producer John D. Beck, Brotherton appeared during the curtain calls for the July 28 and Aug. 24 tapings. The Matt actor also posted a selfie with Candace Cameron Bure from the set on June 12.

Besides potentially bonding with his unlikely bestie Steve, Matt will definitely be hanging with D.J.'s oldest son Jackson in Season 4. Actor Michael Campion shared a photo from the set with him and Brotherton in character looking at a broken down car. "This pic is from my favorite episode," Campion wrote. (Based on a post from Brotherton, it appears that this episode was Bure's directorial debut as well.) In an interview with Meaww, Campion elaborated on Brotherton's involvement this season.

"I actually get to spend some quality time with Matt and Steve and we have this kind of mini-episode together. It's a lot of fun. I think that is what I am most excited about everyone to see, besides the storylines," Campion told Meaww. It's no wonder he's excited since Campion has been vocal about the fact that he's solidly Team Matt.

While he didn't want to give too much away, Campion hinted at things continuing to be complicated for Matt's love life. Campion said that things get "a little bit weird in Season 4 because we see a whole new set of relationship stuff with Matt and all that" and that this relationship could "mess things up." And as eagle-eyed fans saw in the Season 4 trailer, Matt may just start dating D.J.'s nemesis Gia, played by Marla Sokoloff.

Joey Gladstone himself, Dave Coulier, confirmed that Sokoloff returns in an interview with Michigan's MLive. "She's great, she is so funny. So yeah, she comes back and you're gonna see the Team Steve-Team Matt stuff," Coulier said. He didn't explicitly state that the Team Steve-Team Matt debate would be reignited because of Stephanie's bad influence friend Gia, but that sure seems to be the case. Especially since in the trailer, you can see Matt with his arm around Gia during a dinner event with D.J., Steph, Kimmy, and Fernando.

Brotherton posted a photo of himself with Sokoloff from the set with the caption, "😈Gia😈... getting others in trouble when no one's looking since 1993." So it sure looks like Matt and Gia will be an item, which just adds to the wacky interconnected web of Fuller House since Jackson likes Gia's daughter Rocki.

Since D.J. has never approved of Gia, the main matriarch of the Fuller-Tanner-Gibbler household is not going to take too kindly to Gia dating her ex. So although D.J. and Steve are happily together, D.J. might be jealous of Matt's new love interest. Of course, that wouldn't be fair of D.J. to intervene in Matt's love life after she broke up with him. Which means that Fuller House could have perfectly set up D.J. to learn a valuable life lesson.

Other photos from the set also hint that D.J., Gia, and Steve will be hanging together at a Bayview High prom-themed reunion, which could possibly be the location for a D.J. and Gia showdown. But no matter how it all turns out, Team Matt fans can rejoice that Brotherton is returning for Season 4. And instead of Team Matt or Team Steve dominating the conversation, it looks like viewers will have to become Team D.J. or Team Gia.