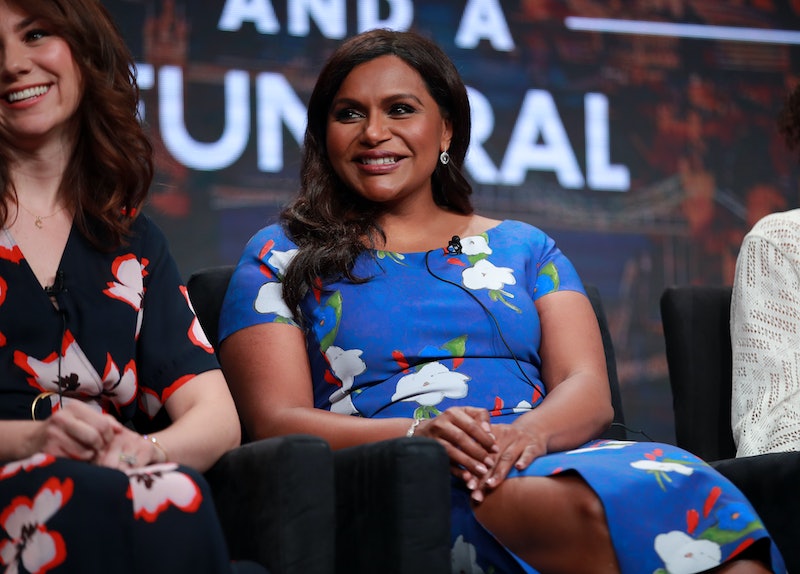 Calling all rom-com fans: Hulu's adaptation of the whimsical, beloved British film Four Weddings and a Funeral premieres on Wednesday. Helming the ship is none other than Mindy Kaling, who wrote the script alongside The Mindy Project writer Matt Warburton. And while Kaling isn't in Four Weddings and a Funeral herself, her influence is certainly felt throughout the whole project, from the socially conscious comedy to the diverse cast.

For those unfamiliar with the original 1994 film, it was directed by Mike Newell and written by Richard Curtis. The story centers around Hugh Grant and Andie MacDowell's characters, who fall for each other immediately but don't get together until after four weddings and a funeral. For the Hulu version, Kaling and her team use the same basic scenario, but this time with a diverse cast led by Game of Thrones' Nathalie Emmanuel and Indian Summers' Nikesh Patel. Emmanuel plays Maya, an American senatorial campaign worker who flies to London for her BFF's birthday and ends up having an airport meet-cute with Patel's Kash — who's unfortunately already dating Maya's BFF.

Kaling told the Los Angeles Times she was at first hesitant to remake what she saw as a "completely perfect" rom-com, but became interested when she realized she could modernize the cast, which was entirely white in the original. "I was looking at it through the lens of how I see London and the sort of people I know there," Kaling explained. "I thought, 'OK, that could look different. That might be worth doing.' The only reason to do something like this was to show things I have not seen in romantic comedies before.”

With her work on Late Night, Champions, and now Four Weddings and a Funeral, Kaling has been quietly advancing the kinds of stories Hollywood tells. Emmanuel praised Kaling to the LA Times for being an advocate for diversity: "It just goes to show that when you have people of color and women in the writers' room what a difference that makes in casting."

Patel had similar things to say about Kaling's writing on the show, which explores Kash's cultural background as a Pakistani man growing up in London. "It's really important to center a British Muslim man in a way that doesn't happen very often," Patel told Entertainment Weekly. "There are a number of stories where a character like that is seen as a threat or as peripheral."

The show is not about the fact that these characters are people of color though. Instead, Kaling and her team simply normalize the idea that love is a universal concept, and that people of color don't always need culturally specific tales like Crazy Rich Asians to exist and thrive in the rom-com genre. The series itself shows off Kaling's encyclopedic knowledge of romance films, in the same way The Mindy Project was about Mindy's endless search for a love that lived up to the stuff of Hollywood movies; Mindy herself just happened to be a South Asian woman.

Within the first episode of Four Weddings and a Funeral alone there are references to Clueless, Say Anything, and the British fan favorite Love, Actually. Kaling creates a bridge between these classic, but less diverse rom-coms with her new series, proving one can still pay homage while also making space for something entirely more meaningful and new.