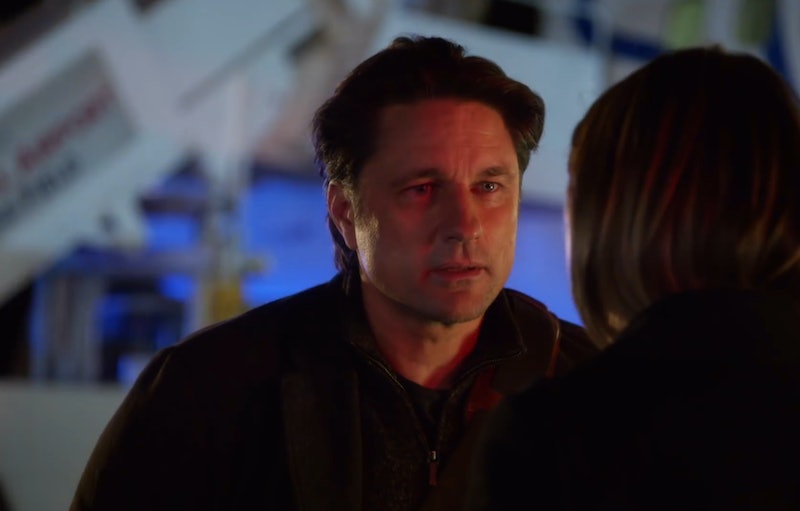 Characters come and go on Grey's Anatomy, some more devastatingly than the rest. Dr. Nathan Riggs, Owen's old war buddy and fiancee of Owen's sister Megan, was one such fleeting presence. He briefly had a fling with Meredith before realizing that Megan was still alive, but soon flitted off to lead a happy life with his soon-to-be-wife and her son Farouk, never to be seen again. Now, it's been revealed that Owen's getting a blast from the past, but will Riggs return to Grey's Anatomy?

Buzz about a potential Riggs reappearance began when Abigail Spencer, who played Megan, posted on Instagram that she's reprising her role on Grey's Anatomy. Fans were excited about her return, and the possibility that she'd bring her hubby back with her. But according to TVLine, unfortunately Nathan Riggs will not be returning to his old stomping grounds. "Plot details are being kept under lock and key, but this much we can share: Megan’s main squeeze Nathan (played by former cast member Martin Henderson) will not be joining her back in Seattle," the outlet reports. Boooo!

It's unclear exactly why Megan is popping back into Seattle, but the trailer shows her VERY excited about Owen and Teddy's upcoming baby, so that'll be interesting. And perhaps Riggs is keeping things in order with Farouk while she makes a work trip.

People are bound to be disappointed, for sure. Grey's Anatomy fans are still talking about him even seasons after his departure, and many even think continue to think he's better suited for Meredith than her current flame DeLuca is.

"I’ve always loved him. I also liked Megan. I just didn’t like them together," Reddit user IlaDC wrote last month. "I wish they both would have stayed. I thought he was perfect for Mer." Others said he might have even measured up to Derek-level chemistry with Meredith if given the chance. "I could see the chemistry with Riggs almost like Mer with Derek," another user, carmantakes, wrote. "I think they should have kept him on, worked on the story a bit, and let them fall in love."

Granted, after Megan came back to life after being presumed dead, it would've been hard for Riggs to leave her behind. Those are some pretty incredible circumstances, and even if he had feelings for Meredith, with Megan is probably where he needed to be.

When he departed the show in 2017, Henderson told Deadline how he thought Riggs and Megan's story would continue offscreen. He said he envisioned their future as a hopeful one, regardless of the roadblocks they'd inevitably face.

"I think there’s probably going to be a tenuous start to their life together given all the circumstances leading up to their separation, then their reunion, and the complications of the relationship with Meredith. In a real-world scenario, I don’t think the transition will be seamless. They’ve embarked on a commitment to start a new positive change and a new energy. Thinking symbolically, the image of them on the beach looking at a new horizon, for me signifies a sense of a new beginning and hope. Obviously raising the child, and Nathan finding his feet in a new town, won’t be without its challenges. They’re committed to a life together."

If I can't have a Riggs and Meredith endgame, is it too much to ask for a Riggs and Megan spin-off? Two people reconnecting after one was presumed dead, while they both practice medicine, grapple with their military past, and raise an adopted child? That's TV gold.

Even if viewers don't get to see Riggs again just yet, there's probably still hope for the future — Megan's return is evidence in itself that old faces can pop back in at any time. Teddy is a regular again after multiple seasons away, and heck, even Burke was back on our screens for a hot second after being gone for seven years. For now, let's just embrace Megan's presence, and hope that one day Riggs makes his way back home too.