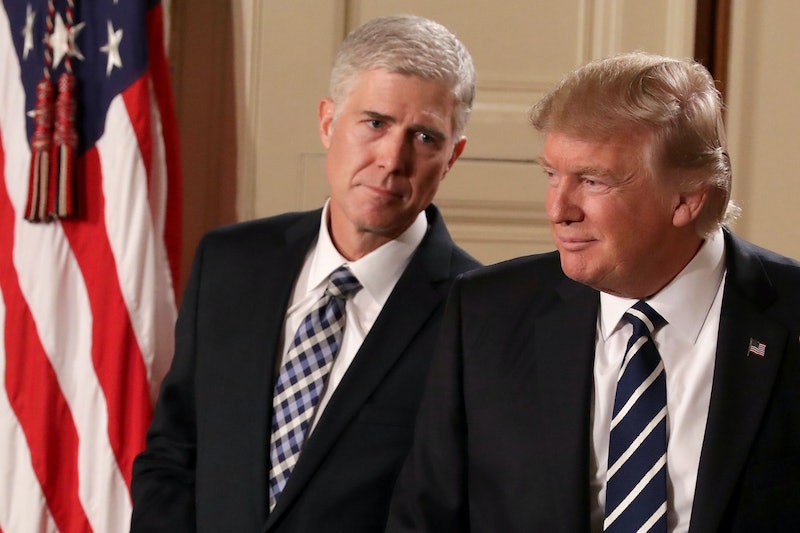 On Tuesday, President Trump made his long-awaited Supreme Court nomination, announcing Neil Gorsuch as his pick for the vacant spot on the bench. With degrees from Columbia, Harvard, and Oxford universities, Gorsuch is sure to be right at home among the bench's Ivy League elite, but he is notably younger than his new colleagues. At 49 years old, Gorsuch won't be the youngest Supreme Court justice ever, but he will be the youngest member of the current bench — that is, if he's confirmed.

In fact, according to The Washington Post, Gorsuch would become the youngest Supreme Court justice since Justice Clarence Thomas was confirmed in 1991, at the age of 43 years old. To put Gorsuch's age into perspective, consider this: Early in his career, Gorsuch clerked for Supreme Court Justice Anthony Kennedy. Barring any road bumps during the confirmation process, it's possible that he'll now hear cases alongside his former boss.

In other words, imagine your first internship. Now, imagine running that company along with the boss who hired you for that internship. That's the story of Gorsuch and Kennedy.

Still, Gorsuch has more than 15 years on the youngest Supreme Court justice ever. In 1811, Joseph Story earned that title when he was nominated to the high court by then-President James Madison. Story was just 32 years old. According to PBS, Story contributed greatly to decisions on commercial and admiralty law.

Although he's the youngest of his time, Gorsuch's experience could indicate that he'll also contribute greatly to the court's decisions. Until he is confirmed by the Senate, Gorsuch sits on the bench of the U.S. Court of Appeals for the Tenth Circuit. Previously, he has worked at a Washington, D.C. law firm and as a visiting professor at the University of Colorado's School of Law. In his current role, Gorsuch has weighed in on such significant cases as Burwell v. Hobby Lobby Stores, Inc., in which the Supreme Court ultimately ruled that corporations could, for religious reasons, refuse to cover contraception for employees.

The appointment of a relatively young justice could give Trump's presidency an undeniable legacy, for better or for worse. Upon confirmation, Gorsuch will receive a lifetime appointment, which could put him on the bench for several decades. Not to mention, with several current justices in or approaching their 80s, Trump could have the opportunity to make more than one nomination to the court. That creates the potential for a legacy that will long outlast his presidency.